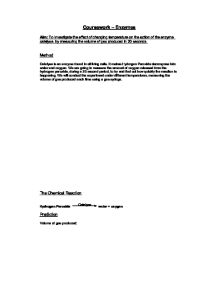 To Investigate the effect of changing temperature on the action of the enzyme catalyse, by measuring the volume of gas produced in 20 seconds

Coursework - Enzymes Aim: To Investigate the effect of changing temperature on the action of the enzyme catalyse, by measuring the volume of gas produced in 20 seconds Method Catalyse is an enzyme found in all living cells. It makes Hydrogen Peroxide decompose into water and oxygen. We are going to measure the amount of oxygen released from the hydrogen peroxide, during a 20 second period, to try and find out how quickly the reaction is happening. We will conduct the experiment under different temperatures, measuring the volume of gas produced each time using a gas syringe. The Chemical Reaction Hydrogen Peroxide water + oxygen Prediction Volume of gas produced: In other words, when the temperature is increased, the rate of enzyme activity will also increase: for every 10?c rise in temperature, I predict that the rate of enzyme activity will roughly double. For example, increasing the temperature the experiment was conducted under from 20?c to 30?c, I would expect the rate of enzyme activity to be roughly double what it was at 20?c. I also predict that as I raise the temperature to 30, 35 and 40?c, this is where I will see the greatest reaction. I predict this because enzymes are designed to work best at the internal body temperatures of the animals they belong to. For a mammal, this tends to be somewhere around 37?c. I also predict that if the temperature is increased to higher than 40-45?c, enzyme activity will begin to decrease and eventually cease completely. I know this because enzymes are proteins, which denature under high temperatures. An enzyme must remain a specific shape if it is to successfully break down molecules. ANALYSING AND CONCLUDING Graph and Line of Best Fit I have drawn a graph showing the results that I have collected. The correlation of the points made it possible to draw a line of best fit onto my graph. ...read more.

More and more gradually denature as the temperature is raised above optimum temperature. Eventually, no enzymes would be able to digest food anymore. Once an enzyme becomes denatured, it does not matter how fast it's substrate is moving about, or how often it bumps into it's substrate it will never be able to digest food molecules. In summary... In a summary of the above points: At low temperatures the particles of reacting substances do not have much energy. However, when the substances are at higher temperatures, the particles take in energy. This causes them to move faster and have collisions more often, so the rate of the reaction increases. The more collisions there are the faster the reaction. The same is true for chemical reactions inside the human body that are controlled by enzymes, but because enzymes are proteins they will be denatured and no longer work if the temperature exceeds approximately 45?c. Evaluating Are My Results Reliable? When we conducted the experiment everything went relatively well and according to plan. We did everything we could to keep it a fair test and tried to control all the factors that might have made the results inaccurate. However, there were many things that could have caused inaccuracy that were beyond our control. The key factors in this investigation: 1. Temperature 2. Time (how long we ran the experiment for) 3. Amount of Hydrogen Peroxide 4. Size/Surface Area of Liver These key factors are some of the main things, which affected our results. We tried to keep these constant (if possible) each time we conducted the experiment. The factor that we altered in our investigation was temperature. We also measured Time and Amount of Hydrogen Peroxide. Do the results look right? Using science and facts about enzymes that we already knew, it was possible to look at our results table and say if our results looked right or not. ...read more.

We could repeat the experiment a greater number of times: The more times you repeat an experiment, the more sure you can be that your results will be reliable, providing you conduct the experiment as precisely and accurately as possible. If we repeated the experiment more times, we could also calculate the average amount of gas collected, omitting any anomalous results, so that the results could be looked at as a whole. What Further Work Could I do to Collect Further Evidence? If I had more time there are other things that I would do to collect extra evidence, that is relevant to this investigation: Testing at temperatures below and above the lowest and highest temperature we used I would do this so that I could find out how the trend for cooler temperature continues, and also how much the temperature would have to be increased until there was no enzyme activity whatsoever, i.e. when all the enzymes become denatured. Carrying out further tests at temperatures around optimum temperature If I did this, and plotted the results on my graph, I would have a much better idea about how the line of best fit is shaped when it reaches it peak, and exactly where the optimum temperature for enzyme activity is, as it is hard to be sure at the moment, because there are so few points around that area of the graph. I could become sure of what the optimum temperature is for the rate of activity of the enzyme catalyse. Conducting the experiment for over 20 seconds We only carried out our experiment for a 20 second period. However, it would be interesting, and also relevant to this investigation, to conduct experiments over other lengths of time. We might be able to find out if enzyme activity increases or decreases the longer they are working for, and if another graph of an experiment using longer (or shorter) periods of time would have a different line of best fit to the one I have already drawn up. ...read more.