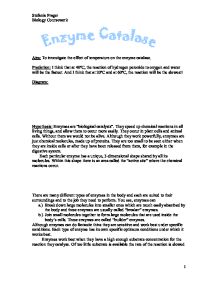 To Investigate the Effect of Temperature On the Enzyme Catalase.

Aim: To investigate the effect of temperature on the enzyme catalase. Prediction: I think that at 40�C, the reaction of hydrogen peroxide to oxygen and water will be the fastest. And I think that at 20�C and at 60�C, the reaction will be the slowest! Diagram: Hypothesis: Enzymes are "biological catalysts". They speed up chemical reactions in all living things, and allow them to occur more easily. They occur in plant cells and animal cells. Without them we would not be alive. Although they work powerfully, enzymes are just chemical molecules, made up of proteins. They are too small to be seen either when they are inside cells or after they have been released from them, for example in the digestive system. Each particular enzyme has a unique, 3-dimensional shape shared by all its molecules. Within this shape there is an area called the "active site" where the chemical reactions occur. There are many different types of enzymes in the body and each are suited to their surroundings and to the job they need to perform. You see, enzymes can a.) Break down large molecules into smaller ones which are much easily absorbed by the body and these enzymes are usually called "breaker" enzymes. b.) Join small molecules together to form large molecules that are used inside the body's cells. ...read more.

- Gradually you add the water into the mortas, stirring it with the liver until the juice you end up with is smooth and runny. - You pour the water that you have left over (the water that would've spilt on the table if you had poured it into the mortas.) into a big conical flask. - Next you pour the diluted liver juice into the big conical flask and pop a sturdy bun into the opening. - And there you have your liver juice. Apparatus for experiment: - One Test Tube - Delivery Tube - Measuring Cylinder - Bath filled with water - Three Water Baths heated at different temperatures - Stopwatch Before the Experiment: - Fill three test tubes with 10cm� of Liver juice and place into first heated water bath. - Fill next three test tubes with 2cm� of the Hydrogen Peroxide and also place into first heated water bath. - You wait until the liver juice and the hydrogen peroxide in each test tube has reached the same temperature as the heated water bath, ie. If the water bath is at 40�C, the test tubes should also all be at 40�C before the experiment takes place. - You prepare each experiment at different temperatures exactly like above. Now you are ready to start the experiment. ...read more.

It becomes deformed when there is too much kinetic energy (from the heat) supplied and the enzymes are shaken and rattled around which breaks the molecular bond structure of the enzyme and so they loose the shape of their active site. Evaluation: Our results were pretty accurate except for the last temperature. I think that the average time for the experiments at 70�C is far too low because at this stage the enzymes should start to be denaturing, so I think this is the anomalous result. I think this also occurred because we had performed the experiments over a period of four lessons, always using the same concentration of liver juice, but because we stored it in the fridge the cold might have affected the catalase enzymes in the liver juice. At first, we were very clumsy with our experiments. It was really hard, as we had never performed an experiment like this. At first we had trouble putting the bun on, timing accurately or missing oxygen bubbles. We re-tested one experiment for the 70�C temperature because we had missed the oxygen bubbles and so had forgotten to time. If I were to redo this experiment, I would: - Practise putting the bun onto the test tube, - Pay careful attention to the experiment, - Check temperatures accurately, - And carry out some re-tests to check what went wrong - - - - ?? ?? ?? ?? Stefanie Frager Biology Coursework 1 ...read more.