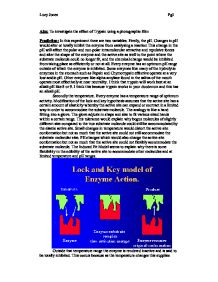 To investigate the effect of Trypsin using a photographic film

Aim: To investigate the effect of Trypsin using a photographic film Prediction: In this experiment there are two variables. Firstly, the pH. Changes in pH would alter or totally inhibit the enzyme from catalysing a reaction This change in the pH will affect the polar and non-polar intramolecular attractive and repulsive forces and alter the shape of the enzyme and the active site as well to the point where the substrate molecule could no longer fit, and the chemical change would be inhibited from taking place as efficiently or not at all. Every enzyme has an optimum pH range outside of which the enzyme is inhibited. Some enzymes like many of the hydrolytic enzymes in the stomach such as Pepsin and Chymotrypsin effective operate at a very low acidic pH. Other enzymes like alpha amylase found in the saliva of the mouth operate most effectively at near neutrality. I think that trypsin will work best at an alkali pH like 8 or 9. ...read more.

Outside that temperature range the enzyme is rendered inactive and is said to be totally inhibited. This occurs because as the temperature changes this supplies enough energy to break some of the intramolecular attractions between polar groups as well as the Hydrophobic forces between non-polar groups within the protein structure. When these forces are disturbed and changed, this causes a change in the secondary and tertiary levels of protein structure, and the active site is altered in its conformation beyond its ability to accommodate the substrate molecules it was intended to catalyse. Most enzymes (and there are hundreds within the human organism) within the human cells will shut down at a body temperature below a certain value, which varies according to each individual. In this case I think that it will work best a 400 C as this is about body temperature and it is at about this temperature that it works in the Duodenum. Preliminary experiment: We are investigating the best pH at which Trypsin works. ...read more.

A piece of the film was placed in each test tube. At this time a stop clock is started. Each test tube is monitored until the film goes clear. Results table: Analysis: The optimum pH of the enzyme was pH 9, which is what I predicted the preliminary experiment showed this. However the optimum temperature wasn't 400 C but it was 710C, which is not what I expected this again goes back to the lock and key hypothesis. The higher temperature gave the active site become more elastic to change shape to fit the substrate. My conclusions are that trypsin works best at an alkali pH and a temp of 710 C. Evaluating: In my experiment I think that we should of used a bigger range of temperatures because then we may have been able to see when the enzyme denatured. I also think for the preliminary experiment we could have tested more buffer solutions to see whether the enzyme would have worked better in more alkali solution. I think that my results support my conclusion and there weren't very noticeable anomalous. ?? ?? ?? ?? Lucy Jones Lucy Jones Pg1 ...read more.