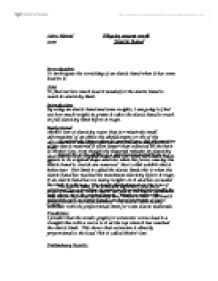 To investigate the stretching of an elastic band when it has some load on it.

To investigate the stretching of an elastic band when it has some load on it.

To find out how much load is needed for the elastic band to reach its elasticity limit.

By using an elastic band and some weights, I am going to find out how much weight in grams it takes the elastic band to reach its full elasticity limit before it snaps.

Hooke’s law of elasticity states that for relatively small deformations of an object the displacement or size of the deformation is directly proportional to the deforming force or load.

At relatively large values of applied force, the deformation of the elastic material is often larger than expected on the basis of Hooke’s law, even though the material remains its elasticity and returns to its original shape and size when the load is taken off.

Elasticity is the ability of a deformed material body to return to its original shape and size when the forces causing the elastic band to stretch are removed.  Most solids exhibit elastic behaviour.  This limit is called the elastic limit; this is when the elastic band has reached the maximum elasticity before it snaps.

I think that the accuracy of the experiment was maintained very well and I did this by:

The accuracy in number 5 could be improved by working a lot quicker and trying to get the experiment complete in the lesson or if not perhaps labelling the equipment is a good idea so that you can use the same equipment and recognize which set of apparatus you used last time.

But then again if I was to do this same investigation again I would try and improve the accuracy of the results by repeating the experiment a third time and concentrate more on making it a fair test.

Overall I was very pleased with the out come of my investigation, but the points made above could improve it.