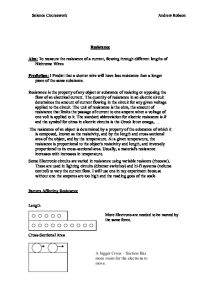 To measure the resistance of a current, flowing through different lengths of Nichrome Wires

Aim: To measure the resistance of a current, flowing through different lengths of Nichrome Wires

Prediction: I Predict that a shorter wire will have less resistance than a longer piece of the same substance.

The resistance of an object is determined by a property of the substance of which it is composed, known as the resistivity, and by the length and cross-sectional area of the object, and by the temperature.

OHM'S LAW
Current flows in an electric circuit in accordance with several definite laws. The basic law of current flow is Ohm's law, named after its discoverer, the German physicist George Ohm. Ohm's law states that, over a wide range of circumstances and materials, the amount of current flowing through a conductor is directly proportional to the electromotive force applied between the ends of the conductor. If resistance is defined as the ratio of electromotive force to current, then
V = IR, where I is the current in amperes, V is the electromotive force in volts (see Electrical Units), then Ohm's law is equivalent to saying that R (which is measured in ohms) is a constant in the specified circumstances. A material for which this holds true is described as ohmic. Ohm's law can apply to electric circuits for both direct current (DC) and alternating current (AC), but additional principles must be invoked for the analysis of complex circuits and for AC circuits involving inductances and capacitances.

The possible variables in this experiment are:

The dependant variable is the amount of resistance in the circuit.

Because we are dealing with electricity it is important to take safety precautions such as: