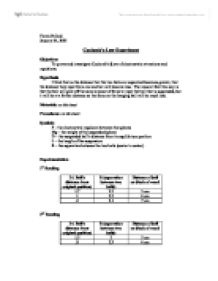 Travis Pollard January 26, 2005 Coulomb's Law Experiment Objectives To prove and investigate Coulomb's |Law of electrostatic attractions and repulsions. Hypothesis I think that as the distance that the two balls are separated becomes greater, that the distance they repel from one another will become less. The reason I feel this way is that the ball will give off the same amount of force to repel the ball that is suspended, but it will be at a farther distance so the force on the hanging ball will be much less. Materials: on lab sheet Procedures: on lab sheet Symbols F - the electrostatic repulsion between the spheres Mg - the weight of the suspended sphere D - the suspended ball's distance ...read more.

Distance of ball on block of wood 1 1.5 5 cm .8 2.3 6 cm .6 2.8 7 cm Data Analysis Over all, the three readings which I got when I performed this experiment all proved to be rather similar other than the last one which clearly shows the ball was simply just charged much less than the other two experimentations. A very evident pattern throughout this entire experiment is that when the distance on the block of wood increased, so did the separation between the two balls. This prove that although the ball on the block of wood was carrying the same amount of charge if moved closer or farther, but that if the ball moved closer, the distance repelled was much more because once the force came closer, it also became a greater force acting upon the suspended ball. ...read more.

One of them is that each test ball we used, we had rubbed at a different intensity and at a different amount of time with the wool sheets. This means that each individual ball that we used to conduct the experiment had a different charge from the one used previous to it and the one used after it. Another aspect is that if we needed to move quickly because as time progressed, the ball slowly lost its charge into the air around it. This means that if we took too long moving the ball on the block of wood, our results would not have proved to be true. Also a few other factors could have played a part such as the table being knocked and the ball swaying as a result of this. ...read more.