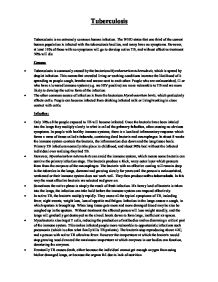 Tuberculosis. Only 30% of the people exposed to TB will become infected. Once the bacteria have been inhaled into the lungs they multiply slowly in what is called the primary infection,

Tuberculosis Tuberculosis is an extremely common human infection. The WHO states that one third of the current human population is infected with the tuberculosis bacillus, and many have no symptoms. However, at least 10% of those with no symptoms will go to develop active TB, and without effective treatment 50% will die. Causes: * Tuberculosis is commonly caused by the bacterium Mycobacterium tuberculosis, which is spread by droplet infection. This means that crowded living or working conditions increase the likelihood of it spreading as people cough, breathe and sneeze next to each other. People who are malnourished, ill or who have a lowered immune system (e.g. are HIV positive) are more vulnerable to TB and are more likely to develop the active form of the infection. * The other common source of infection is from the bacterium Mycobacterium bovis, which particularly affects cattle. People can become infected from drinking infected milk or living/working in close contact with cattle. Infection: * Only 30% of the people exposed to TB will become infected. ...read more.

If a heavy load of bacteria is taken into the lungs, the infection can take hold before the immune system can respond effectively. * In active TB, the bacteria multiply rapidly. They cause all the typical symptoms of TB, including fever, night sweats, weight loss, loss of appetite and fatigue. Infection in the lungs causes a cough, in which sputum is brought up. When lung tissue gets more and more damaged blood may be also be coughed up in the sputum. Without treatment the affected person will lose weight steadily, and the lungs will gradually get destroyed as the alveoli break down to form large, inefficient air spaces. * Mycobacteria also target T cells, reducing the production of antibodies and so disarming a critical part of the immune system. This makes infected people more vulnerable to opportunistic infections such pneumonia (which is often what finally kills TB patients). The bacteria stop reproducing above 42C, and a person with active TB often has fever. ...read more.

* The most effective ways of controlling TB involve improving living standards; less crowded housing and working conditions mean people are less likely to spread the disease, being generally healthier and better fed means that people are less likely to develop the full-blown disease following infection. * In countries where TB is rare, attempts are made to contact all the people in regular close contact with the patient so that they can be tested for TB and either immunised or treated as appropriate. * Immunisation has been very effective in the final reduction of cases of TB in western countries. The BCG vaccine is a live attenuated strain of mycobacterium which is given as a single injection. Vaccination, especially of young babies, is increasing in developing countries as it is significantly cheaper than treatment. * Despite vaccination, instances of TB are growing again. Reasons include: deteriorating social conditions, immigration, rise in HIV infections, increase in foreign travel. Another worrying development is the evolution of multidrug-resistant strains of mycobacterium tuberculosis, where the treatment is much more difficult and expensive. ...read more.