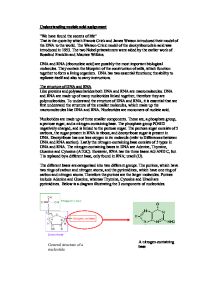 Understanding nucleic acid assignment "We have found the secrets of life" That is the quote by which Francis Crick and James Watson introduced their model of the DNA to the world. The Watson-Crick model of the deoxyribonucleic acid was introduced in 1953. The two Nobel prizewinners were aided by the earlier work of Rosalind Franklin and Maurice Wilkins. DNA and RNA (ribonucleic acid) are possibly the most important biological molecules. They contain the blueprint of the construction of cells, which function together to form a living organism. DNA has two essential functions; the ability to replicate itself and also to carry instructions. The structure of DNA and RNA Like proteins and polysaccharides both DNA and RNA are macromolecules. DNA and RNA are made up of many nucleotides linked together, therefore they are polynucleotides. To understand the structure of DNA and RNA, it is essential that we first understand the structure of the smaller molecules, which make up the macromolecules like DNA and RNA. Nucleotides are monomers of nucleic acid. Nucleotides are made up of three smaller components. These are, a phosphate group, a pentose sugar, and a nitrogen-containing base. The phosphate group PO4H2 negatively charged, and is linked to the pentose sugar. ...read more.

In DNA, between the two polynucleotide strands, there is just enough space for one small molecule (base; pyrimidine) and on large molecule (purine), so therefore the base pairings in double polynucleotide chains is always purine-pyrimidine. The nitrogen bases bond as follows in DNA: A - T G - C Or in case of RNA: A - U* Notice how in RNA, the Uracil replaces th Thymine molecule.) G - C This is called complimentary base pairing hence meaning that whatever the sequence of nitrogen containing bases in one strand, the sequence of the other strand must be complimentary to it. However these hydrogen bonds between base pairings can easily be broken, this occurs when the DNA is replicated, or when DNA is being manufactured. Differences between DNA and RNA Amongst numerous differences between the different nucleic acids, the main difference is that DNA has a deoxyribose (pentose) sugar on its nucleotide structure, therefore it is a deoxyribonucleic acid. However RNA, has a ribose sugar on its nucleotide structure, therefore it is ribonucleic acid. Ribose has OH on 2-carbon, unlike deoxyribose, which lacks an O (oxygen) in 2-carbon, and is only left with a H (hydrogen). Moreover, DNA is double stranded polynucleotide, unlike RNA, hence RNA is not paired, therefore it will have a greater variety of nucleic bases (refer to different types of RNA)., whereas DNA will only have 4. ...read more.

Just by looking at the model they had created, Watson and Crick could see from the structure of the DNA, that it could be copied or replicated perfectly. They were so certain that the structure of the DNA was correct as before they experimented they knew that, there was four things that the experiment had to find out; that the sugar-phosphate backbone was on the outside, and the bases were on the inside, that the strands went opposite ways, anti parallel, that the molecule was a double helix and also that there was specific base pairings. The picture shows Watson and Crick demonstrating how the DNA molecule is structured. Further classical genetics works have taken place regarding the structure of the DNA. For instance when Watson and Crick stated that the DNA molecule would copy itself perfectly, time and time again, although now we know that its is true, at the time, there was no proof. So an experiment was carried out by Mehelson and Stahl in 1958 to prove that semi conservative replication took place. This meant that one strand of the structure of DNA would be replaced by a new strand. Semi conservative replication was only one of the theories, which existed, however it was the most likely, the other two theories of replication of the DNA structure were conservative and dipersive replications. ?? ?? ?? ?? ...read more.

****
This starts off as a really clear, concise, well thought out essay, with a good level of detail and accuracy.

Unfortunately in the DNA/RNA differences paragraph there are lots of silly mistakes and misunderstandings.

It would be nice to see a little more about the different types of RNA and a brief description of transcription (such as a diagram clarifying how reverse complementary sequences work) / translation.