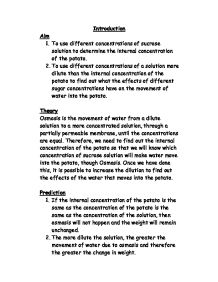 the problem of temperature, we used 6 discs and left it for 24 hours to eliminate the problem of incorrect surface area, we stopped water from evaporating by covering each boiling tube with cling film, and we towelled off the discs to remove excess moisture. However, to eliminate the anomalies completely, we could have used a papet instead of a measuring cylinder because the measuring cylinder is not always accurate. Also we can't be sure that all the osmosis that could have happened did happen. We could have eliminated this problem by weighing it in trials after every hour until the mass did not change. Finally, we might have destroyed the membrane while preparing the potato and to eliminate this problem we would do an experiment with visking tubing which would involve putting water into a testube and sugar solution into the visking tubing and then leave it for 24 hours. The results I obtained lend some evidence to support the prediction, however since there were so many anomalies I would need more evidence to lead to a firm conclusion. ...read more.