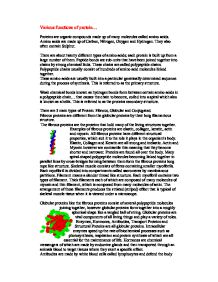 Various functions of protein... Proteins are organic compounds made up of many molecules called amino acids. Amino acids are made up of Carbon, Nitrogen, Oxygen and Hydrogen. They also often contain Sulphur. There are about twenty different types of amino acids; each protein is built up from a large number of them. Peptide bonds are sub-units that have been joined together into chains by strong chemical links. These chains are called polypeptide chains. Polypeptide chains usually consist of hundreds of amino acid molecules linked together. These amino acids are usually built into a particular genetically determined sequence during the process of synthesis. This is referred to as the primary structure. Weak chemical bonds known as hydrogen bonds form between certain amino acids in a polypeptide chain... ...read more.

Skeletal muscle consists of fibres containing smaller myofibrils. Each myofibril is divided into compartments called sacromeres by membranous partitions. Filament means a slender thread like structure. Each myofibril contains two types of filament. Thick filaments each of which are composed of many molecules of myosin and thin filament, which is composed from many molecules of actin. The arrangement of these filaments produces the striated (striped) effect that is typical of skeletal muscle tissue when it is viewed under a microscope. Globular proteins like the fibrous proteins consist of several polypeptide molecules joining together, however globular proteins form together into a roughly spherical shape like a tangled ball of string. Globular proteins are vital components of all living things and play a variety of roles. ...read more.

There this type of protein plays a very vital structural role in every living cell. Conjugated proteins consist of a globular protein associated with a non-protein chemical. * A glycoprotein is made up of protein and carbohydrate. For example: Mucus, which is a slimy, viscous substance secreted by epithelial cells to lubricate or protect parts of the body. * A lipoprotein is a complex molecule consisting of protein and lipid. Lipoproteins coat the products of fat digestion which are absorbed from the small intestine before being transported round the body. * Haemoglobin is an oxygen-transporting pigment in blood. We need haemoglobin cells to survive. All proteins play a wide variety of roles in our bodies and all living cells. Some are part of the cell structure, some are our bodies defence mechanisms, some transport all the essential materials to and fro, whilst others regulate biochemical reactions and metabolic processes. ...read more.