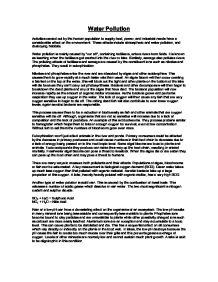 Water Pollution Activities carried out by the human population to supply food, power, and industrial needs have a considerable effect on the environment. These effects include atmospheric and water pollution, and destroying habitats. Water pollution is mainly caused by "run off", containing fertilisers, enters rivers from fields. It is known as leaching when the fertilisers get washed into the river or lake. Similarly, sewage also pollutes rivers. The polluting effects of fertilisers and sewage are caused by the constituent ions such as nitrates and phosphates. They result in eutrophication. Nitrates and phosphates enter the river and are absorbed by algae and other autotrophies. This causes them to grow rapidly at a much faster rate than usual. ...read more.

Although, organisms that are not so sensitive will increase due to a lack of competition and the lack of predators. An example of this is bloodworms. They process proteins similar to hemoglobin which helps them to take in enough oxygen for survival, even at low concentration. Without fish to eat them the numbers of bloodworm grow even more. Eutrophication won't just affect animals in the river and ponds. Primary consumers could be affected by the decrease in primary producers and could cause numbers in that food chain to decrease due to a lack of energy being passed on to the next tropic level. Some algal blooms are toxic to plants and animals. Toxic compounds they produce can make their way up the food chain, resulting in animal mortality. Freshwater algal blooms can pose a threat to livestock. ...read more.

The low pH results in many mineral ions being less soluble and consequently less avalable to plants. Phophates ions become bound to clay particles and are unavailable to plants while other possitivlty charged ions such as calcium are more easily leached. Aluminium ions are an exception and may accumulate to a toxic level. This can cause plants to be defoliated and die. This has a sequential effect on all consumers which rely directly or indirectly on the plants in the food web. In lakes, the low pH destroys because the pH cause the fish to create too much mucas over their gills and this prevents gaseos exchage of oxygen. Levels of other minerals are normaly low and cannot sustain much plant growth. A lake is said to be oligotrophic in this condition. ...read more.