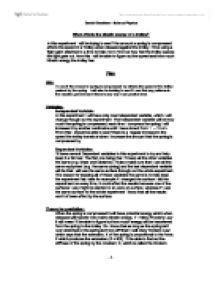 In this experiment I will be trying to see if the amount a spring is compressed affects the speed of a Trolley when released against the trolley. I’ll be using a ‘light gate’ attached to a time to help me to find out how fast the trolley passes the light gate out, from this I will be able to figure out the speed and how much Kinetic energy the trolley has.

Aim:
To see if the amount a spring is compressed by affects the speed of the trolley pushed by the spring.  I will also be looking to see if I can find any patterns in the results I get and see if there is any way I can predict what.

Method:
I did this experiment using a computer simulation but if I would of done this experiment to keep it a fair test I would of made sure that each time I did the test I’d only change in independent variables. I would of started by setting a spring loaded plunger behind a Trolley so I’ll be able to set the spring up compressed at different amounts, that when released will push the trolley, as the trolley is travelling I’ll read the amount of time that the trolley takes to pass a light gate and then from the amount of time it took to pass the light gate, I can work out how fast the trolley was travelling at.

Each time I’d do the experiment again I’d increase the amount that the spring is compressed, I would increased it by another Centimetre, by doing this I’d be

Extending the experiment:
One extension to the experiment that I could do is by seeing if the weight oft eh trolley affects the speed it travels at. To do this I’d have to test the spring compressed at each amount at several times, each time adding a set amount of weight.