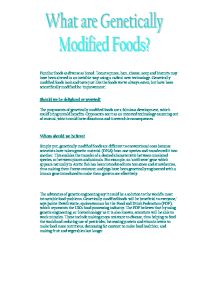 What are Genetically Modified Foods?

food healthier, and making fruit and vegetables last longer So why has every single supermarket chain decided to ban all genetically modified ingredients from their own-label products? 'Consumers are being conned,' says Iceland chairman and chief executive Malcolm Walker. 'This is probably the most significant and potentially dangerous development in food production this century, yet the British public is largely ignorant of it, and they are likely to be eating genetically modified foods already without their knowledge.' So what are the risks? According to the FDF, genetic engineering is only an extension of what has been taking place already. "Since history began, man has bred plants and animals to make them stronger, healthier and bigger. ...read more.

The Consumers Association feels that 'genetically modified foods could potentially benefit consumers'. However, it is concerned about the absence of any labelling system to enable shoppers to choose whether to buy genetically engineered foods or not. Currently labelling foods as GM or containing GM ingredients is voluntary. The European Commission is currently arguing over the extent of compulsory labelling rules, cantering on whether genetically modified organisms should be identified as they leave producers, or after they have been processed. Meanwhile, the companies who stand to make billions from genetic engineering are determined to safe guard their investment. They're throwing all their weight into wooing us, the doubting public, hiring PR consultants and pulling out all the stops to sell the theoretical benefits of this new technology. ...read more.