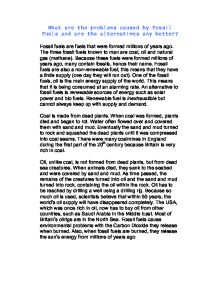 What are the problems caused by fossil fuels and are the alternatives any better?

What are the problems caused by fossil fuels and are the alternatives any better? Fossil fuels are fuels that were formed millions of years ago. The three fossil fuels known to man are coal, oil and natural gas (methane). Because these fuels were formed millions of years ago, many contain fossils, hence their name. Fossil fuels are also a non-renewable fuel; this means that they have a finite supply (one day they will run out). One of the fossil fuels, oil is the main energy supply of the world. This means that it is being consumed at an alarming rate. An alternative to fossil fuels is renewable sources of energy such as solar power and bio fuels. Renewable fuel is inexhaustible but cannot always keep up with supply and demand. ...read more.

When animals died, they sank to the seabed and were covered by sand and mud. As time passed, the remains of the creatures turned into oil and the sand and mud turned into rock, containing the oil within the rock. Oil has to be reached by drilling a well using a drilling rig. Because so much oil is used, scientists believe that within 50 years, the world's oil supply will have disappeared completely. The USA, which was once rich in oil, now has to buy oil from other countries, such as Saudi Arabia in the Middle East. Most of Britain's oilrigs are in the North Sea. Fossil fuels cause environmental problems with the Carbon Dioxide they release when burned. ...read more.

To be efficient at energy however, it needs continuous sunshine. Nuclear energy is renewable in a sorts, with reprocessing plants dealing with radioactive waste. Small amounts of nuclear fuel produces large amounts of energy. However, nuclear radioation is dangerous and high safety standards are needed. The waste materials from the power plants stay radioactive for thousands of years. A nuclear reactor speeds up natural nuclear reactions in radioactive materials. The heat generated by these reactions is used to produce electricity. All forms of energy production has its advantages and disadvantages. Fossil fuels and nuclear energy have the worst side effects and so, alternatives must be found. Other types of alternative energy sources have little or no effect on the environment. They may cost a lot, take up land and 'spoil' the scenery, but this is a small price to pay in order for our planet and way of life to survive. ...read more.