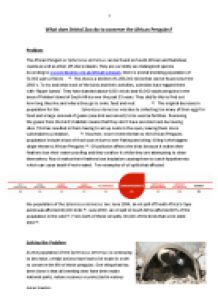 What Does Bristol Zoo Do To Help Conserve The African Penguins

﻿What does Bristol Zoo do to conserve the African Penguins? Problem The African Penguin or Spheniscus demersus can be found on South African and Namibian coasts as well as other off-shore islands. They are currently an endangered species. According to www.bristolzoo.org.uk/african-penguin, there is a total breeding population of 72,000 pairs of birds (1). This shows a decline of 1,856,000 birds that can be found since the 1900?s. To try and keep track of the birds and their activities, scientists have tagged them with ?flipper bands?. They have banded about 4,000 chicks and 40,000 adult penguins in the area of Robben Island of South Africa over the past 33 years. They did/do this to find out how long they live and where they go to swim, feed and nest (2). The original decrease in population for the Spheniscus demersus was due to collecting too many of their eggs for food and a large removal of guano (sea-bird excrement) to be used as fertiliser. Removing the guano from the bird?s habitats means that they don?t have secreted nest-burrowing sites. This has resulted in them having to set up nests in the open, leaving them more vulnerable to predators (3). However, more recent threats to the African Penguins population include a lack of food source due to over fishing and oiling. Oiling is the biggest single threat to African Penguins (4). Oil pollution affects the birds because it makes their feathers lose their water-proofing and they swallow it whilst they are attempting to clean themselves. ...read more.

The diagram shows how installing no-fishing zones has reduced the foraging range for the African penguins. From 2008 to 2010 the birds have gone from having a broader range of feeding dives to having a smaller but deeper range of dives. This shows that the zones have succeeded in keeping a sustainable amount of fish near a breeding site to be able to feed the penguins without them having to travel far distances. Is the Solution Appropriate? Turning certain areas where the African penguins live and breed into national parks initially showed that it benefited the population at the Boulders Penguin Colony in Simons Town. This colony was established in 1983 and from then up to 2005 there was an increase in numbers from surrounding island colonies that showed breeding pairs of 3,900 birds (13). These figures show us that turning specific areas into national parks has benefited the population of African Penguins and therefore makes it an appropriate solution. The ban of fishing in zones close to the birds? breeding sites is more effective for them as they don?t have to travel as far to find food as there is no longer any over-fishing. This solution is considered more appropriate than others as it doesn?t cost money to maintain it and no living organisms are affected by it. As we can see from (fig. 2.), from 2008 to 2010 the foraging ranges for the African Penguins has decreased along with the fisheries catches. ...read more.

We can see that from 1940 to 2009 there has been a massive increase in the population for the Siberian tiger. This is because they were put into a captive breeding programme therefore stopping them from being hunted. As they mated in this breeding programme, their population grew and an observation of their habitat took place. Once they had bred enough tigers to keep a steady population and the observation of the habitat had been complete, the tigers were reintroduced back into the wild. To help to aid the rise in population, they were put under protection, meaning that it was illegal for them to be hunted. A combination of the breeding programme and the awareness leading to the protection of these animals helped to increase their population figures. If conservation breeding fails, then a second alternative is needed. In this case, the second alternative to captive breeding could be to move the colony. In order to do this, a lot of research would need to take place into a new habitat and whether it is suitable for the African penguins. There will need to be a high level of certainty that they will be able to survive in the new habitat provided for them and not be put in a habitat that they cannot adjust to. For this to be completed, all breeding sites would have to be visited so that all eggs can be collected along with all living penguins so that there are none left in their original habitat. This second alternative could work but it would be very time consuming and would require a lot of research. ...read more.