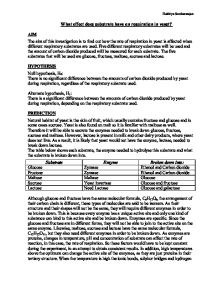 What effect does substrate have on respiration in yeast?

What effect does substrate have on respiration in yeast? AIM The aim of this investigation is to find out how the rate of respiration in yeast is affected when different respiratory substrates are used. Five different respiratory substrates will be used and the amount of carbon dioxide produced will be measured for each substrate. The five substrates that will be used are glucose, fructose, maltose, sucrose and lactose. HYPOTHESIS Null hypothesis, H0: There is no significant difference between the amounts of carbon dioxide produced by yeast during respiration, regardless of the respiratory substrate used. Alternate hypothesis, H1: There is a significant difference between the amounts of carbon dioxide produced by yeast during respiration, depending on the respiratory substrate used. PREDICTION Natural habitat of yeast is the skin of fruit, which usually contains fructose and glucose and in some cases sucrose. Yeast is also found on malt so it is familiar with maltose as well. Therefore it will be able to secrete the enzymes needed to break down glucose, fructose, sucrose and maltose. However, lactose is present in milk and other dairy products, where yeast does not live. As a result, it is likely that yeast would not have the enzyme, lactase, needed to break down lactose. The table below shows each substrate, the enzyme needed to hydrolyse this substrate and what the substrate is broken down into. Substrate Enzyme Broken down into: Glucose Zymase Ethanol and Carbon dioxide Fructose Zymase Ethanol and Carbon dioxide Maltose Maltase Glucose Sucrose Yeast invertase Glucose and fructose Lactose Need Lactase Glucose and galactose Although glucose ...read more.