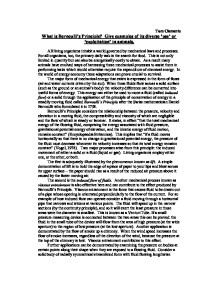 Tom Clements What is Bernoulli's Principle? Give examples of its diverse 'use' or 'exploitation' in animals. All living organisms inhabit a world governed by mechanical laws and processes. For all organisms, too, the primary daily task is the search for food. This is not only limited in quantity but can also be energetically costly to obtain. As a result many animals have evolved ways of harnessing these mechanical processes to assist them in performing tasks which would otherwise require the expenditure of chemical energy. In the world of energy economy these adaptations can prove crucial to survival. The major form of mechanical energy that exists is expressed in the form of flows (air and water currents driven by the sun). When these fluids flow across a solid surface (such as the ground or an animal's body) the velocity difference can be converted into useful forms of energy. This energy can either be used to move a fluid (called induced flow) or a solid through the application of the principle of conservation of energy in a steadily moving fluid called Bernoulli's Principle after the Swiss mathematician Daniel Bernoulli who formulated it in 1738. Bernoulli's Principle considers the relationship between the pressure, velocity and elevation in a moving fluid, the compressibility and viscosity of which are negligible and the flow of which is steady or laminar. It states, in effect "that the total mechanical energy of the flowing fluid, comprising the energy associated with fluid pressure, gravitational potential energy of elevation, and the kinetic energy of fluid motion, remains constant" (Encyclopaedia Britannica). This implies that "if a fluid moves horizontally so that there is no change in gravitational potential energy, the pressure of the fluid must decrease whenever its velocity increases so that its total energy remains constant" (Vogel, 1978). Two major processes arise from this principle: the induced movement of either a solid or a fluid (liquid or gas). ...read more.

The tunnels exit in the centre of a mound of dirt, once regarded as a lookout post. Close examination of these exits reveals that one is a low-rounded dome while the other is a higher, sharper-edged crater mound. The dogs work hard to maintain this difference: the shapes are not accidental. Calculations have shown that even at low wind speeds of one mile an hour the air in the burrow is replaced about once every ten minutes. Both the difference in height and the difference in shape contribute to the effect. Worms living on mudflats (such as lugworms) also construct burrows with two openings, one raised above the other, inducing the flow of fluids (water and air) through the burrow. Turret spiders construct only a single-opening vertical burrow, but this is also ventilated by a mechanism similar to that mentioned above. The second 'opening' is provided for by the diffusion of air through the soil (the spiders only live in environments where the soil is porous). Over the entrance to the burrow is the "turret", a craterlike ring of sand maybe half an inch high bound together with silk. Air enters the burrow through the soil and leaves by the turret where even a gentle breeze is enough to induce a flow of air upward in the burrow. This has other practical effects. The spider lives in the bottom of the burrow during the day, a foot below the surface, and risks desiccation because it has no access to water. However the soil is saturated only a few inches below the surface and the flow of air through the soil and burrow draws up moist air from below. It also prevents the hot surface air from penetrating the burrow. Induced flow of this type is also found in the leaves of plants. The stomatal pores, found on the underside of the leaf, are the sites of gaseous exchange in plants. ...read more.

This is called ram ventilation. So effective is this that many fish stop active pumping at 0.8 m/s and some (like tuna) are unable to actively pump at all, relying instead on continual movement to prevent asphyxiation. The low subambient pressure on the sides of the fish is transmitted to the heart, located beneath the gills, pulling the heart walls out and increasing the stroke volume (so as the fish swims faster more blood is pumped around its body) and reducing the need to increase the stroke rate (this occurs in other animals). Also the relatively positive pressures fore and aft of the heart aid the return of blood. The eyes of a bluefish (and many others) are located at the point where the pressure coefficient passes through zero (i.e. at the point where the pressure is that of normal water); this is a unique location because here pressure is independent of swimming speed. Focus of an eye depends in large part on the curvature of the cornea; it would be difficult if the later were to vary as a result of swimming speed. Fish compensate for the high pressures induced by having a very bony skull. It appears, therefore, that fish are highly evolved to make the most of their environment. Conclusion As has been shown the uses and exploitations of Bernoulli's principle in nature are wide-ranging and very important to the lifestyles of many organisms, specifically all flying and aquatic life. All organisms, to a greater or lesser extent, are affected by flow induced pressures and many must have adapted to make best use of this source of mechanical energy, such as whales and bats for example. There must also be many other organisms that have adapted to use other physical processes to conserve energy. Life revolves around the competitive struggle for resources and any organism that can utilise a 'free' energy source increases its chances of survival. What can be learnt from this? The biologist should be careful when using explanations of phenomena that require expenditure of chemical energy until simpler physical mechanisms have been ruled out. ...read more.