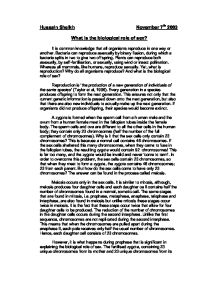 What is the biological role of sex?

Hussain Sheikh November 7th 2003 What is the biological role of sex? It is common knowledge that all organisms reproduce in one way or another. Bacteria can reproduce asexually by binary fission, during which a bacteria splits in two to give two offspring. Plants can reproduce both asexually, by self-fertilisation, or sexually, using wind or insect pollination. Whereas all mammals, like humans, reproduce sexually. Yet, what is reproduction? Why do all organisms reproduce? And what is the biological role of sex? Reproduction is 'the production of a new generation of individuals of the same species' (Taylor et al, 1998). Every generation in a species produces offspring to form the next generation. This ensures not only that the current genetic information is passed down onto the next generation, but also that there are also new individuals to actually make up the next generation. If organisms did not produce offspring, their species would become extinct. ...read more.

Thus, during meiosis, thousands upon thousands of different combinations of genes can be made by crossing over, independent assortment and random fertilisation. This makes each child born unique genetically. Some children have a better chance of surviving than others, depending upon their genetic make up. In 1871, Darwin published 'The Descent of Man', in which he said he believed all humans evolved from apes. This has taken millions of years, and we are still evolving even now. In order to evolve, and to evolve towards a better, stronger, more intelligent species, different genetic sequences are produced during meiosis to give exclusive individuals, some more advantageous than others on the evolutionary scale. The biological role of sex is to procreate. It is to drive already existing organisms to mate and produce new organisms of the same species so that the species is able to continue living. It is to allow for genetic variation to be generated during meiosis. It is to allow for this genetic variation to encourage evolution amongst species. ...read more.