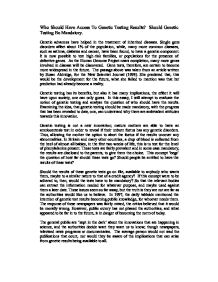 Who Should Have Access To Genetic Testing Results? Should Genetic Testing Be Mandatory. Genetic advances have helped in the treatment of inherited diseases. Single gene disorders affect about 1% of the population, while, many more common diseases, such as asthma, diabetes and cancer, have been found, to have a genetic component. It is now possible to test high-risk families, or populations for the presence of defective genes. As the Human Genome Project nears completion, many more genes involved in disease will be discovered. Gene tests, therefore, are certain to become more widespread in the future. The passage above was taken from an article written by Susan Aldridge, for the New Scientist Journal (1998). She predicted that, this would be the development for the future, what she failed to mention was that her prediction had already become a reality. Genetic testing has its benefits, but also it has many implications, the effect it will have upon society, one can only guess. In this essay, I will attempt to evaluate the notion of genetic testing and analyse the question of who should have the results. Examining the idea, that genetic testing should be made mandatory, with the progress that has been revealed to date, one, can understand why there are ambivalent attitudes towards this innovation. ...read more.

At the present moment there is only one British employer using these methods, that is HM Forces. The results can disclose to an employer if a potential employee has a predisposition to a genetic illness. The TUC have stressed their concerns regarding this matter, and have said that some companies may have several motives for conducting tests, one of which can reduce future sick pay costs. (The Observer 27th July 1997) The issue of genetic testing, is in danger of, not just affecting our jobs, homes or futures but our present lives too. One of the few tests generally available at present is for Huntingdon's Disease, which attacks the nervous system and leads to death with fifteen years. The concept of discovering that your grandmother has this disease, the suspicion that your mother may also have the disease, although she does not really want it confirmed. If you have the test and the result is positive, then there is a good chance that your mother may also have the said disease. The psychological and social ramifications of this event happening are quite extensive. Couples can also be tested to show whether they will have a child with cystic fibrosis, the benefits of this is that the couple have the choice of having children and taking the gamble, aborting the foetus or not having children. ...read more.

The implications of this are that private companies also have the right to purchase these tests, to which an individual result are open to abuse. The results of genetic tests, are sometimes sensitive, and may need the relevant counselling. Should genetic test results 'fall' into the inappropriate quarters the implications may be difficult to resolve. In answer to the question: Should genetic testing be made mandatory? The results of these tests have to be stored somewhere. The idea of a genetic database, could enable medical staff to retrieve results quickly. The notion of a genetic database is open to abuse and it being used in totally inappropriate ways. Demanding mandatory testing is taking the individuals rights away. In the instance of general genetic disorders or diagnosing a genetic disorder of a particular race or age, the medical authorities are in danger of presenting a concept that is open to discrimination. The above question does not have a right or wrong answer, but the answer can be said to be based upon moral ethics, the ethic code, that is used depends upon, who wants the results? For what reason? And the developments that will progress, when the results are revealed. ...read more.