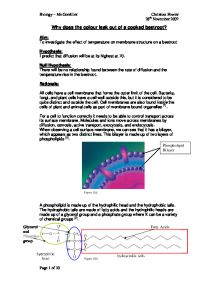 I predict that diffusion will be at its highest at 70.

There will be no relationship found between the rate of diffusion and the temperature rise in the beetroot.

For a cell to function correctly it needs to be able to control transport across its surface membrane. Molecules and ions move across membranes by diffusion, osmosis, active transport, exocytosis, and endocytosis.

When observing a cell surface membrane, we can see that it has a bilayer, which appears as two distinct lines. This bilayer is made up of two layers of phospholipids [2]. 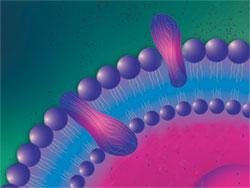 The phosphate head of the molecule is polar, which means that the sharing of the electrons within this part of the molecule is not quite even and so one end becomes slightly positive and the rest is slightly negative. This makes the phosphate head attract other polar molecules, like water, and it is therefore hydrophilic. The fatty acid tails are non-polar and therefore hydrophobic. When added to water phospholipids either form a layer on the surface with their hydrophobic tails directed out of the water, or they arrange themselves into spherical clusters called micelles to avoid contact between the hydrophobic tails and water [2].

Phospholipids that make up the cell surface membrane form a bilayer with all the hydrophilic heads pointing outwards and the hydrophobic tails facing inwards avoiding any contact with water on either side of the membrane. [2].

Diffusion is the movement of molecules or ions from an area of their high concentration to an area of their low concentration. Diffusion will continue until the substance is evenly spread throughout the whole volume. Small-uncharged particles diffuse across the cell membrane, passing between the lipid molecules as they move down the concentration gradient. Small molecules like, oxygen and carbon dioxide, can diffuse rapidly across the cell membrane. Carbon Dioxide is polar but its small size allows rapid diffusion [2]. 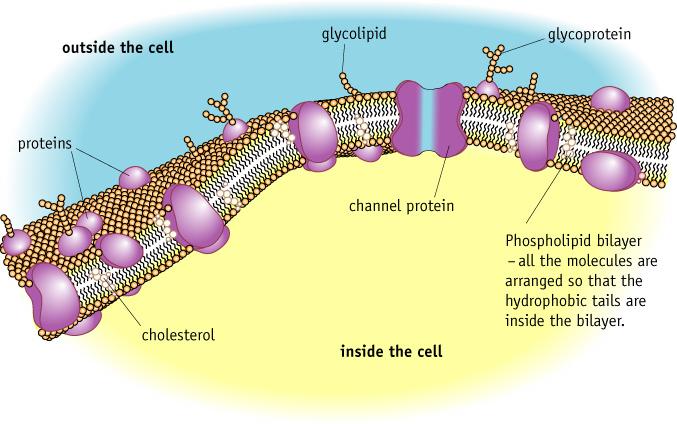 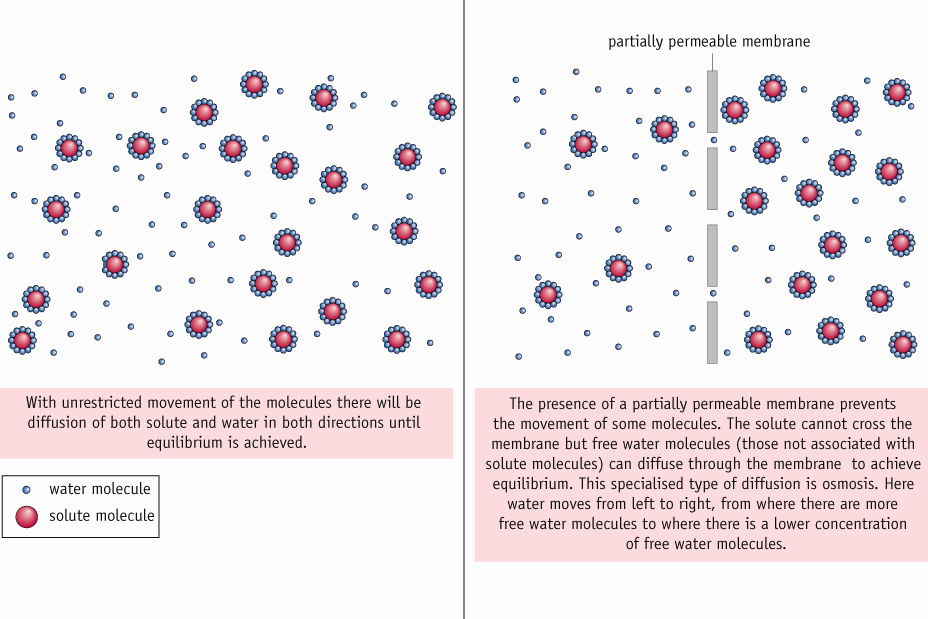 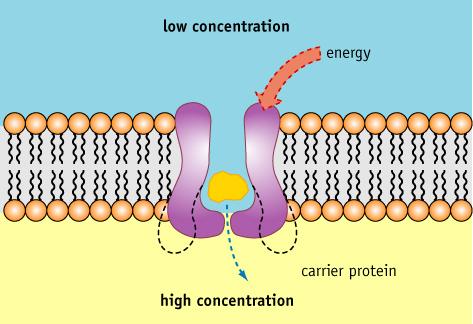 Endocytosis and exocytosis is bulk transport of substances across cell surface membranes. Exocytosis is the release of substances, usually proteins or polysaccharides, from the cell as vesicles fuse with the cell membranes. Endocytosis is the reverse process: substances are taken into the cell by the creation of a vesicle. Part of the cell membrane engulfs the solid or liquid material to be transported. In some cases the substance to be absorbed attaches to a receptor in the membrane and is then absorbed by endocytosis. This is how cholesterol is taken into cells. This is shown in Figure 1. [f] below. 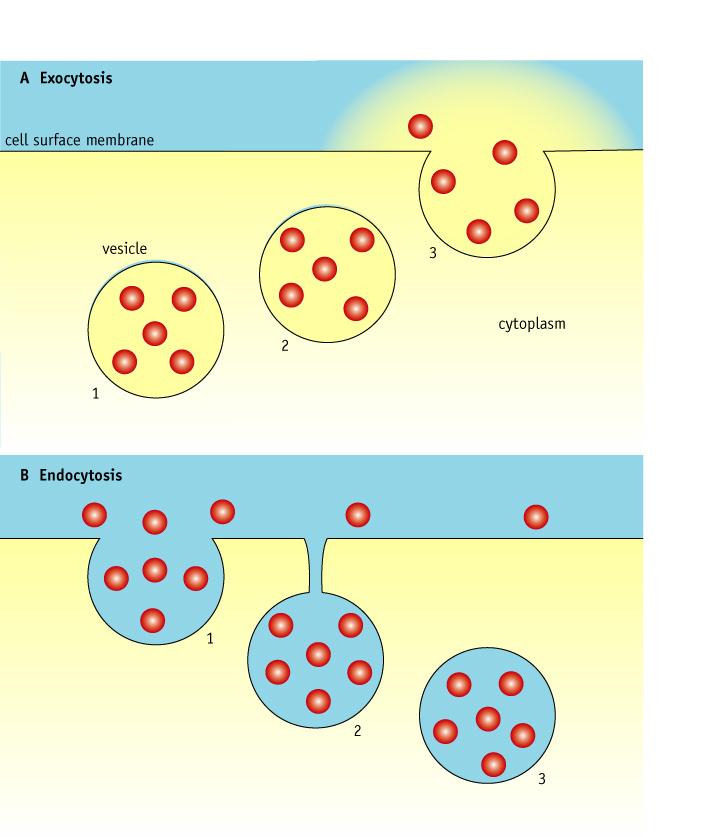 Independent variable: The temperature of the water bath.

Dependant variable: I am measuring the absorbance of beetroot slices.

It is important that I take these variables into account because that way I will be able to keep this investigation fair and so this will produce accurate results.

1        Cut sections from a single beetroot using a size 4-cork borer. Cut eight, 1 cm length slices from these sections. Be careful not to spill beetroot juice on your skin or clothing, as it will stain very badly.

2        Place the slices in a beaker of distilled water. Leave overnight to wash away excess dye.

4        Remove beetroot sections; shake the water/solution to disperse the dye.

7        Using a pipette accurately, measure 2 cm3 distilled water into a cuvette. Place the cuvette into the colorimeter; making sure that the light is shining through the smooth sides.

8        Adjust the colorimeter to read 0 absorbance for clear water. Do not alter the setting again during the experiment.

9        Place 2 cm3 of the dye solution into a colorimeter cuvette and take a reading for absorbency. Repeat the readings for all the temperatures.

Below is the table of results from my investigation. Trial 1 is my own data, Trials 2 and 3 are data that I collected from two different groups who were conducting the same experiment. By doing this, I am able to get a range of results to enable me to identify any trends or patterns, which could support my hypothesis.

Below I have calculated the average absorbency using the above results.

Below is a graph of averaged results that I calculated.

I think that these results are not particularly accurate as the average data shows that there is a fluctuation in the absorbency levels when the temperature increases. We would expect the absorbency to be higher at 20°C compared with the temperature at 10°C but my data shows a decrease at 20°C. There are anomalous results like this throughout my data, which suggests that these results are inaccurate. There could a number of reasons for these anomalous results; the water baths that were used could not have been at the exact temperature, which would then cause different results to occur. A good way of getting round this is to make sure that each water bath is at its exact temperature throughout the experiment, for example adding salt to ice to get the temperature down to exactly 0°C.

As I have taken two sets of results from two different groups, then I need to consider that each group could have conducted their experiment slightly differently, which would inevitably change the outcome of their results.  In future, to make sure that each test was done the same, I would conduct them myself.

Overall I think that these results are relatively accurate as I can come to a conclusion, however I think there needs to be a lot of improvements to get 100% accuracy.

A random error can occur for many reasons during an experiment, even if you’re not following a standard procedure. Carelessness can cause random errors, for example, if you do not follow the exact same procedure as you did the previous test, therefore when measuring out each beetroot piece, one piece maybe slightly longer than the other. This means that there is more surface area for the dye to diffuse into the water, resulting in anomalous results.

Systematic errors may occur due to incorrectly calibrated equipment or a fault in the method of the experiment used. For example, if you used a cuvette that was a little dirty or cloudy, the error introduced would be the samethroughout my investigation. The incorrect use of a piece of equipment may also introduce a systematic error, not adjusting a colorimeter before use would also cause this type of error.