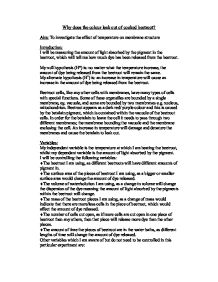 Why does the colour leak out of cooked beetroot? Aim: To investigate the effect of temperature on membrane structure Introduction: I will be measuring the amount of light absorbed by the pigment in the beetroot, which will tell me how much dye has been released from the beetroot. My null hypothesis (H?) is: no matter what the temperature increase, the amount of dye being released from the beetroot will remain the same. My alternate hypothesis (H1) is: an increase in temperature will cause an increase in the amount of dye being released from the beetroot. Beetroot cells, like any other cells with membranes, have many types of cells with special functions. Some of these organelles are bounded by a single membrane, eg. vacuole, and some are bounded by two membranes e.g. nucleus, mitochondrion. Beetroot appears as a dark red/ purple colour and this is caused by the betalain pigment, which is contained within the vacuole of the beetroot cells. In order for the betalain to leave the cell it needs to pass through two different membranes; the membrane bounding the vacuole and the membrane enclosing the cell. An increase in temperature will damage and denature the membranes and cause the betalain to leak out. Variables: My independent variable is the temperature at which I am heating the beetroot, whilst my dependant variable is the amount of light absorbed by the pigment. ...read more.

It could also be because the temperature may have fluctuated slightly over time meaning that the water bath wasn't exactly the same temperature throughout the experiment. The procedure I used was quite good, however if I were to carry out the experiment again I would carry out it out on three different beetroots. I would do this because when you use two sets of data either one could be a 'fluke' so by using three you can definitely see that your results are reliable. Further work I could do is to see how pH level affects membrane structures. To do this I would leave the beetroot in different pH's for 30 minutes and then use a colorimeter to measure the light absorbed by the dye that has been released from the beetroot. Other further work I could do is to see how surface area affects the amount of dye released. To do this I would change the surface area of the beetroot pieces and put them in different temperatures. This would allow me to have confidence in my results, as I would have backed them up with some more data. It would also allow me to further test my hypothesis. Summary: I have proved my alternate hypothesis correct as an increase of temperature breaks down the membrane structure causing an increase in the amount of dye released from the beetroot. My results are fairly accurate as I followed my plan precisely and made adjustments where necessary. ...read more.