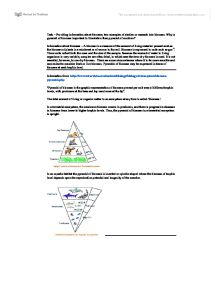 Why is pyramid of biomass important in illustration than pyramid of numbers?

Task - Providing information about biomass; two examples of studies or research into biomass. Why is pyramid of biomass important in illustration than pyramid of numbers? Information about biomass - A biomass is a measure of the amount of living material present such as the biomass of plants in a rainforest or of worms in the soil. Biomass is expressed in units such as gm-2. These units reflect both the mass and the size of the sample. Because the amount of water in living organisms is very variable, samples are often dried, in which case the term dry biomass is used. It is not essential, however, to use dry biomass. ...read more.

Source : http://earth.rice.edu/mtpe/bio/biosphere/topics/energy/40_biomass.html The energy flow between levels It is also useful to think of the food producers and consumers as part of a "biomass pyramid," in which the comparative masses of consumers and food can be represented simultaneously. Instead of energy, the approximate masses of the animals and plants involved are "stacked up" in pyramidal fashion, with the primary producers (plants) at the bottom, and the last (generally largest) carnivore in the "food chain" at the top. The poor energy-transfer efficiency from one trophic level to the next manifests itself by the end of the chain, where a mere one-hundredth of a percent of the "base" of the pyramid remains. ...read more.

by cattle would be used by people, essentially "saving" a great deal of available energy and biomass. This concept is particularly important in international food organizations, as world population continues to increase, and the difficulty of properly feeding everyone becomes more crucial. By "skipping over" levels of the biomass pyramid, less energy is wasted, and more available energy - food - becomes accessible to humans. A period of biomass is more accurate because the pyramid will continually shrink as it rises from Producers to Primary Predators because the overall mass of the total group will continue to decrease. In a pyramid based on numbers, there could be an increase in the pyramid as it goes up because one group of plankton which eats photosynthetic plankton could be more numerous, but weigh less. ...read more.

** Some useful information about pyramids of biomass and useful definitions, but no research discussed