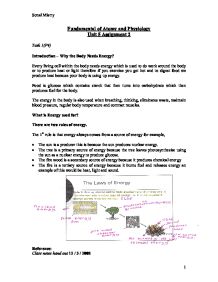 Why the Body Needs Energy? Every living cell within the body needs energy which is used to do work around the body or to produce heat

Fundamental of Atomy and Physiology Unit 5 Assignment 2 Task 1(P4) Introduction - Why the Body Needs Energy? Every living cell within the body needs energy which is used to do work around the body or to produce heat or light therefore if you exercise you get hot and to digest food we produce heat because your body is using up energy. Food is glucose which contains starch that then turns into carbohydrate which then produces fuel for the body. The energy in the body is also used when breathing, thinking, eliminates waste, maintain blood pressure, regular body temperature and contract muscles. What is Energy used for? There are two rules of energy. The 1st rule is that energy always comes from a source of energy for example, * The sun is a producer this is because the sun produces nuclear energy. * The tree is a primary source of energy because the tree leaves photosynthesise using the sun as a nuclear energy to produce glucose. * The fire wood is a secondary source of energy because it produces chemical energy * The fire is a tertiary source of energy because it burns fuel and releases energy an example of this would be heat, light and sound. Reference: Class notes hand out 12 / 3 / 2008 The 2nd rule of energy is that it can't be created or destroyed but only changed from one form to another form an example of this would be someone eating food glucose energy would be transferred to the muscle which allows the person to run therefore transferring chemical energy into kinetic energy, heat and sound energy. Reference: Class notes hand out 12 / 3 / 2008 Forms of Energy Energy comes in many different forms an example of this would be fire is a source of heat energy, sun is a source of light energy, ear absorbs sound energy, food is a source of chemical energy which is the most common energy because it always comes from some sort of packaging and you always have to unpackaged it to use and abuse it. ...read more.

The Function of the Larynx * The larynx is a passageway for air between the pharynx and trachea. * It filters bacteria, helps in voice production and warms and moistens the air. Reference: http://www.ivy-rose.co.uk/Topics/Respiratory_Components.htm http://training.seer.cancer.gov/module_anatomy/unit9_4_resp_passages3_larynx.html Website viewed on 20/5/08 Trachea From the larynx, air travels to the trachea. The Structure of the Trachea * The trachea is a continuation of the larynx. * It is a tube about 10cm long which runs from the front of the neck to the chest were its divided into two bronchi, tubes which lead to the lungs. * The trachea is made of incomplete ring of hyaline cartilage (anteriorly) and involuntary muscles and connective (posteriorly). * It is lined with ciliated epithelium which contains mucus-secreting goblet cells. The Function of the Trachea * The trachea is a passageway for the air between the larynx and bronchi. * The goblet secretory cells in the lining secrete mucus which collects any foreign matter or bacteria and the cilia pushes this up towards the larynx. Reference: http://training.seer.cancer.gov/module_anatomy/unit9_4_resp_passages3_larynx.html Website viewed on 21/5/08 Bronchi The bronchi are the branches of the respiratory tube which transport air in and out of each lung. The Structure of the Bronchi * The bronchi connect the trachea to the lungs. * There are two of them, one on the left and one on the right which enters the lungs at the hilum, a converted depression, where they subdivided into different branches for different lobes of the lungs * The trachea is made of hyaline cartilage. * Involuntary muscles and connective tissues and are lined with ciliated epithelium. The Function of the Bronchi * To pass air from the trachea into the bronchioles, and to the lungs. Reference: http://www.dbcare.org/asthma_files/image001.jpg http://training.seer.cancer.gov/module_anatomy/unit9_4_resp_passages3_larynx.html Website viewed on 21/5/08 Bronchioles The final and finest tube in the passage of the air from the nose and the nose to the lungs is bronchioles. The Structure of the Bronchioles * Bronchioles are made of muscular, fibrous and elastic tissues. ...read more.

* It consists of the ceacum, appendix, colon, r****m, a**l canal, and a**s. The Function of the Large Intestine * To reabsorb water and nutrients from the digestive waste to get rid of waste. * Whenever remains of the food, once it has been thought process of mixing, conversion and abortion carried out in the stomach and small intestines, this is passed into the large intestine. * Any remaining nutrients are removed and results within the faeces. Faeces * Are the unwanted leftovers from the food which then combines with the cellulose (roughage) which is then indigestible this is found in foods like vegetables and bran, dead blood cells bacteria (both living and dead), fatty acid mucus, used to help move the faeces through the large intestines. * The colour comes from the dead blood cells and bilirubin which is a bile pigment. Reference: http://www.malton.n-yorks.sch.uk/ScienceWeb/BiologyWeb/human/digestive_system/kidshealth.html http://tabacco.blog-city.com/human_digestive_system_overview__anatomy_function_maintenanc.htm Website viewed on 4 / 6 / 08 Liver The structure of the liver * The liver is the largest glands within the body. * The liver sits at the top of the abdomen, and jus below the diaphragm and just above and to the right of the medial line. * It is vital because it performs many essential functions. The function of the liver * The liver is a vital for cleansing and storage as well as production. * It removes * Toxin from drugs, alcohol, and harmful substances. * Nitrogen from amino acids. The liver stores * Vitamin A, B12, D, E, K * Glycogen is a compound that stores energy * Iron, from the breakdown of red blood cells and food * Fats The liver produces * Heat this means that the liver is the bodies radiator by producing more heat then any other organs as a result of its various functions. * Vitamin A (from carotene, found in green leafed vegetables and carrots) * Vitamin D * Heparin * Plasma proteins: albumin, globulin, prothrombin, fibrinogen * Bile * Uric acid and urea, from breakdown of red blood cells and de - aminatation of amino acid. ?? ?? ?? ?? Sonal Mistry 1 ...read more.