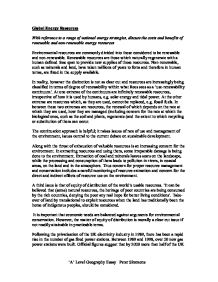 With reference to a range of national energy strategies, discuss the costs and benefits of renewable and non-renewable energy resources

Global Energy Resources With reference to a range of national energy strategies, discuss the costs and benefits of renewable and non-renewable energy resources Environmental resources are commonly divided into those considered to be renewable and non-renewable. Renewable resources are those which naturally regenerate with a human defined time span to provide new supplies of those resources. Non-renewable, such as minerals and land, have taken millions of years to form and therefore in human terms, are fixed in the supply available. In reality, however the distinction is not as clear cut and resources are increasingly being classified in terms of degree of renewability within what Rees sees as a 'use-renewability continuum'. At one extreme of the continuum are infinitely renewable resources, irrespective of how it is used by humans, e.g. solar energy and tidal power. At the other extreme are resources which, as they are used, cannot be replaced, e.g. fossil fuels. In between these two extremes are resources, the renewal of which depends on the rate at which they are used, how they are managed (including concern for the rate at which the biological ones, such as the soil and plants, regenerate (and the extent to which recycling or substitution of them can occur. ...read more.

employ fewer staff and are therefore cheaper to run; for its employees, the gas industry is less dirty and dangerous than the coal industry * They produce electricity more cheaply than nuclear power stations * They are cleaner for the environment; they produce almost no sulphur dioxide (which contributes to acid rain) and little carbon dioxide. They therefore help the government meet its internationally agreed targets in these areas. In Britain, an important reason why new gas fired power stations have been built has less do with environmental protection and more to do with the structure of the electricity industry. After privatisation, the generating companied who produced the electricity were split from the distributing companies who sold the electricity to consumers. Because they did not want to e totally reliant on the generators, they decided to produce some of the electricity themselves. Gas was the cheapest option available to them. * It is seen as a wasteful use of a natural resource. Assuming no new discoveries, at the end of 1995 the UK had only 10 years of gas reserves left at the current rate of consumption. These reserves will soon be used and, then, the UK will become dependent on imports- making the cost of electricity and domestic gas possibly more expensive. ...read more.

For this reason they are generally only found in high income countries. As well as their high cost, they also have the disadvantage that they can only produce power during the daytime. Energy conservation will involve more efficient use of energy- in homes, in business and in transport. It reduces the demand for energy and, therefore, the emission of greenhouse gases. It also cuts people's fuel bills. In the UK, the 1995 Home Energy Conservation Act set a target of a 30% reduction in domestic energy consumption within 10 years. Local councils were given the task of using a mixture of guidance, advice and financial grants to achieve this aim. The main domestic energy savings come from better insulation and also from draught exclusion. Double glazing, together with wall, loft, and hot water tank and pipe insulation can cut the energy used by more than 60%. If all homes in Britain were as energy efficient as those being built under current regulations, the country would easily meet its target for a 20% reduction in CO2 emissions by 2010. The UK government increasingly uses the tax system as a means of cutting fuel consumption. In particular, 'carbon taxes' on mot vehicle fuel are designed to reduce the use of cars and Lorries and to persuade people to buy more fuel efficient vehicles. 'A' Level Geography Essay Peter Simmons ...read more.