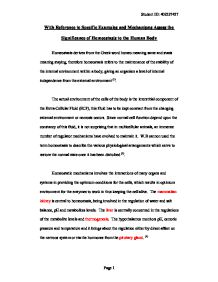 With Reference to Specific Examples and Mechanisms Assess the Significance of Homeostasis to the Human Body.

With Reference to Specific Examples and Mechanisms Assess the Significance of Homeostasis to the Human Body Homeostasis derives from the Greek word homeo meaning same and stasis meaning staying, therefore homeostasis refers to the maintenance of the stability of the internal environment within a body, giving an organism a level of internal independence from the external environment (1). The actual environment of the cells of the body is the interstitial component of the Extra-Cellular Fluid (ECF), this fluid has to be kept constant from the changing external environment or necrosis occurs. Since normal cell function depend upon the constancy of this fluid, it is not surprising that in multicellular animals, an immense number of regulator mechanisms have evolved to maintain it. W.B cannon used the term homeostasis to describe the various physiological arrangements which serve to restore the normal state once it has been disturbed (2). Homeostatic mechanisms involves the interactions of many organs and systems in providing the optimum conditions for the cells, which results in optimum environment for the enzymes to work in thus keeping the cell alive. The mammalian kidney is central to homeostasis, being involved in the regulation of water and salt balance, pH and metabolites levels. The liver is centrally concerned in the regulations of the metabolite levels and thermogenesis. ...read more.

It protects us from bacteria as well as water and heat loss. The two distinct levels are dermis and epidermis. The epidermis is composed of epithelial tissue and provides biggest form of protection, fibrous connective tissue makes up the dermis which is most of the skin. The dermis has a network of vessels flowing providing its nutrients, the epidermis layer receives its nutrients via diffusion through the tissue fluids as it is not vascularised. There is a layer of dead cells which protects the epidermal layer, these are called keratinocytes. And they produce keratin which gives waterproof and protective properties. There are also melanocytes cells producing the pigment melanin which is responsible for the colouring of the skin. Metabolic activities results in heat production and during vigorous exercise active organs produce excess heat (11) which needs removing from the body to prevent a harmful rise in body temperature and the potential development of heat stroke (12). If there is a change in the temperature then the loss of heat through the skin is specifically maintained by neurones controlling the extent of dilation of the arterioles. When the temperature of the body is increased by 0.25 to 0.5 C the sweat glands are stimulated to secrete sweat, which is conveyed to the surface of the body by ducts (13). ...read more.

Clotting factors are substances involved in clotting and they create a cascade of interactions that results in clot formation. The clotting process is a positive feedback mechanism: once a clot is formed it continues to expand and external factors are required to hold it in check. Clotting occurs in three stages. The first stage can occur via two distinct pathways, intrinsic or extrinsic, and results in the formation of the enzyme prothrombinase. This phase can be described as a cascade of interactions between clotting factors (18). Source: Marieb EN, 2004, Human Anatomy & Physiology, Sixth Edition, San Fransisco, Pearson Benjamin Cummings; Page 663 Source: http://www.the-scientist.com/images/yr2002/sep16/figure.gif Haemophilia is a disorder of the blood clotting system. There are different types of haemophilia and it depends on the deficiency of the blood clotting factors. The person suffering from haemophilia will not stop bleeding. Treatment involves transfusions of fresh plasma or concentrates of the deficient clotting factor to relieve fro tendency to bleed (19). Other examples of positive feedback mechanisms are lactation and labour contractions. To summarise the significance of homeostasis, the homeostatic system of the body is which organs work together to maintain its structure and functions through assortment of dynamic equilibriums carefully controlled by interdependent regulation mechanisms. The system reacts to every change in the environment, or to every random disturbance, through a series of modifications of equal size and opposite direction to those that created the disturbance (20). The aim of these adjustments is to maintain the internal balances. ...read more.