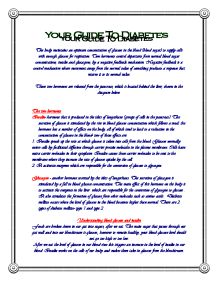 Your guide to diabetes.

The body maintains an optimum concentration of glucose in the blood (blood sugar) to supply cells with enough glucose for respiration. Two hormones control departures from normal blood sugar concentrations, insulin and glucagons, by a negative feedback mechanism. Negative feedback is a control mechanism where movement away from the normal value of something produces a response that returns it to its normal value. These two hormones are released from the pancreas, which is located behind the liver, shown in the diagram below. The two hormones Insulin- hormone that is produced in the islets of langerhans (groups of cells in the pancreas). The secretion of glucose is stimulated by the rise in blood glucose concentration which follows a meal. the hormone has a number of effects on the body, all of which tend to lead to a reduction in the concentration of glucose in the blood- two of these effects are 1. Insulin speeds up the rate at which glucose is taken into cells from the blood. Glucose normally enters cells by facilitated diffusion through carrier protein molecules in the plasma membrane. ...read more.

Insulin works on the cells of our body and makes them take in glucose from the bloodstream. Some of the glucose is used by the cells for energy (by respiration), and some is converted into glycogen or fat which are stores of energy. However when the levels of glucose in the blood begin to fall then level of insulin falls. Some glycogen or fat is then converted back into glucose which is released from the cells into the bloodstream. Understanding the 2 types of diabetes Type 1 diabetes The facts Usually diagnosed in childhood The body makes little or no insulin Daily injections of insulin are required to sustain life Without proper daily management, medical emergencies can arise. Occurs when the insulin producing cells are destroyed by the bodies own Type immune system. Is also referred to as insulin-dependant diabetes mellitus or juvenile onset diabetes. Can occur at any age, however usually starts in people younger than 30 What is happening? The beta cells of the pancreas produce little or no insulin, this prevents glucose from entering the body cells. ...read more.

This is known as "self testing" Regular testing can tell you how well you are dieting, exercising to control diabetes. The results can be used to adjust meals, activity or medication to keep blood sugar levels at an appropriate level. Diet and weight control is also an important aspect to consider when treating diabetes. Meal planning can include:- choosing healthy foods, eating the right amount of food eating meals at the right time. If you are suffering from diabetes, when you cannot achieve normal blood glucose levels with diet and exercise medication is also added to the treatment plan. Your doctor will start you on oral medicines such as; Oral sulfonylureas - trigger the pancreas to secrete more insulin. Biguanides stimulate the liver to decrease its production of glucose, which increases glucose levels in the blood stream. Meglitinides trigger the pancreas to make more insulin in response to how much glucose is in the blood. Advice- Visit a diabetes care provider every three months. Everyone should have their blood glucose checked at least every three months. Regular testing of random blood glucose should begin at a younger age and be performed more often if you are at particular risk for diabetes. ...read more.