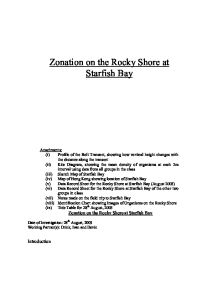 Zonation on the Rocky Shore at Starfish Bay.

Zonation on the Rocky Shore at Starfish Bay Attachments: (i) Profile of the Belt Transect, showing how vertical height changes with the distance along the transect (ii) Kite Diagram, showing the mean density of organisms at each 2m interval using data from all groups in the class (iii) Sketch Map of Starfish Bay (iv) Map of Hong Kong showing location of Starfish Bay (v) Data Record Sheet for the Rocky Shore at Starfish Bay (August 2003) (vi) Data Record Sheet for the Rocky Shore at Starfish Bay of the other two groups in class (vii) Notes made on the field trip to Starfish Bay (viii) Identification Chart showing Images of Organisms on the Rocky Shore (ix) Tide Table for 28th August, 2003 Zonation on the Rocky Shore at Starfish Bay Date of Investigation: 28th August, 2003 Working Partner(s): Drink, Ivan and Devin Introduction The research question explores into the zonation pattern on the rocky shore at Starfish Bay. Such investigation is useful as it provides information about whether the rocky shore ecosystem is divided into distinct zones, and acts as an indicator of the health of the environment. For example, if results of continuous investigations are anomalous, negative changes have most likely occurred. This signalises that perhaps more measures are needed for conserving Hong Kong's environment. My hypothesis is that the data collected will show evidence of zonation on the rocky shore, and show assemblages of different species into a banding pattern almost parallel to the waterline. This is because zonation, being the arrangement or patterning of an ecosystem into parallel or sub-parallel bands in response to changes in some environmental factor over a distance, is particularly clear on rocky shores. It is predicted that sufficient data will be collected as rocky shores exist where wave action prevents sediment deposition and the rock forms a stable platform for secure attachment of organisms. Moreover, there were fine weather conditions on the day of investigation - the tide was low revealing a large exposed rocky shore, and there was a clear sky and a gentle breeze. ...read more.

In addition, belt transects can be conducted instead of line transects. Belt transects are performed on a wider scale along several lines of transects with continuous quadrat sampling. This provides more information on community composition as it. However, belt transects can be difficult to carry out and are quite time-consuming. Secondly, the validity of the results should be questioned. Being inexperienced and carrying out the investigation for the first time, the data collected is not likely to be the most accurate. The organisms and their names were unfamiliar, so the process identifying organisms was inefficient. It was rather difficult to estimate the percentage cover of organisms along the transect even with a quadrat, it is thus likely that wrong estimations were made which directly affects the data analysis. The fact that data is collected through estimations makes the results doubtful. A possible solution is to 'rehearse' for the investigation, to try out the experiment once before the actual investigation so that students can familiarize with the procedure and the apparatus. This will better prepare for the actual data collection, and hopefully it will be more accurate. Nonetheless, this requires more time and effort. Thirdly, the analysis of raw data was not the most comprehensive. Out of the 5 organisms selected for the construction of kite diagrams, only 4 phylas (Lichens, Algao, Mollusca and Crustacea) were represented. The phyla Cnidaria was not represented, so analysis was not thorough enough. For instance, Actinia equine (Sea Anemone), which belongs to the Cnicaria phyla, was not represented, but it would have been useful to include it in the kite diagrams. This is because it can stand for the distribution of species alike which survive in the lower zones (least exposure above water, least amounts of sunlight), and this information is important evidence for zonation. To avoid this, one organism should be selected from all the 5 phylas so that there will be a wider coverage and better representation for discussion and comparison. Such measures would further engage students into the investigation, and hence allow for a better understanding about zonation on the rocky shore at Starfish Bay. ...read more.