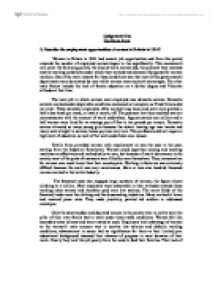 1) Describe the employment opportunities of women in Britain in 1914?

Assignment One The Home Front 1) Describe the employment opportunities of women in Britain in 1914? Woman in Britain in 1914 had several job opportunities and from this period onwards the number of employed women began to rise significantly. This coursework will cover the following points; the kind of work women did, the payment they received and the working conditions under which they worked and chances of progress for women workers. One of the main reasons for these conditions was that most of the governmental departments were dominated by men whilst women were society's stereotypes. The other main factors include the lack of female education on a further degree and Victorian attitudes at that time. The main job in which women were employed was domestic service. Domestic servants worked under deplorable conditions and could not complain as Trade Unions did not exist. These domestic employees often worked long hours and were only granted a half a day break per week, or even a month, off. The payment that they received was not commensurate with the amount of work undertaken. Approximately one million and a half women were hired for an average pay of five to ten pounds per annum. Domestic service attracted so many young girls because the school leaving age was twelve and many went straight in service, hence pay was very low. This profession did not require a high level of education as most of the work undertaken was manual. Textile firms provided women with employment as was the case in the past, starting from the Industrial Revolution. Woman could supervise sinning and weaving machines as effectively and methodically as men, but because of man's dominance in the society most of the posts of overseers were filled by men themselves. ...read more.

To cope with this problem the Ministry of Munitions was created, with David Lloyd George as minister. He was responsible for reorganising the munitions industry and the economy for war and employing more women was his idea. The 'Right to Work March', of July 1915, in which 30,000 women participated coincidently linked with Lloyd George's efforts to expand the industry. The march organized did have an effect as this showed society, both the men and other women, how important and serious the movement was and demonstrated how large numbers of women wanted to have equal rights to men and to make their own contribution to their country's effort in War. Although women thought of this idea as quite alluring most men were not of the same opinion and strikes were held against women employment which forced the government to sign accords with Trade Unions promising that women would not keep their job after the War had ended. By 1916, women had proved to the society and the government how useful they could be. In conclusion, the first period of the war was futile to women's opportunities and employment. The main reasons that brought changes about were the enormous numbers of men going to fight on the Western Front, the introduction of a war economy and social and political factors which have all been created by the War. 3) In what ways did the First World War change the employment opportunities of women in Britain? Women employment was greatly helped by the First World War. The war was the main factor that changed women's employment opportunities during the beginning of the twentieth century in Britain. The war also helped improve many aspects of women employment such as better conditions of work, pay and the different types of job available for women. ...read more.

Before the War there were many restrictions on omen's employment as they were thought to be less capable then men. There was still this idea of women being inferior the men in the first nine months of the war, for example the government kept following their policy of 'business as usual'. When the government finally understood how useful women could be, and how much women could contribute to the War effort if given the possibility, the government promoted women employment and started advertising for this to be the case. The male population responded with strikes of all sorts, but not with sexist ideas but on the contrary when they saw how women had done their jobs as methodically as men, men where scared they would lose their jobs. Society persuaded women to go back to their old employments after the war had finished or back to being housewives. Although women were forced back to doing as they had before the war, Victorian attitudes started to change towards women, giving women more freedom before the War. Nevertheless, the War opened the path of equality, and soon afterwards women got the right to vote although it was under more conditions then the men's right to vote. In general, in my point of view the most important factor which led to equal rights and the vote was the radical change of attitudes the government and society in general took towards women. Many improvements were made, and now women could work in many different professions and a new respect had been created towards women because of World War One. Women had the right now to either work in which field they chose or to stay at home. In my opinion, if it was not for World War One and all the events it triggered off women would not have the same rights as today. ...read more.