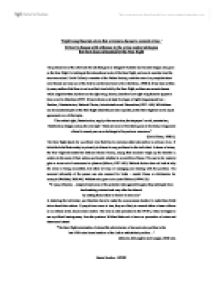 &amp;#145;Right wing theorists claim that criminals choose to commit crime.&amp;#146;Critically discuss with reference to the crime control strategies that have been advocated by the New Right

'Right wing theorists claim that criminals choose to commit crime.' Critically discuss with reference to the crime control strategies that have been advocated by the New Right The political era of the USA and the UK that gave us Margaret Thatcher and Ronald Reagan also gave us the New Right. In looking at the international roots of the New Right, we have to consider how the term was coined. David Collard, a member of the Fabian Society, used the name in a pamphlet about new liberals and was one of the first to use the term here in the UK (Green, 1988:2). It has been written by many authors that there is not a unified view held by the New Right, as there are several stances which might be taken by those on the right wing. Moore, describes how right wing theories appear to have a root in liberalism (1997: 10) and shows us at least five types of right wing perspectives - Realism, Libertarianism, Rational Choice, Administrative and Paternalism (1997: 140). Whilst these can be considered part of the New Right ideas they are also separate, as the New Right are not in equal agreement over all the topics. ...read more.

Boyson, who said the British welfare State and its effects on the people left them weak and 'lacking in moral fibre'. He claimed that helping people too much meant they were less likely to save money, or actively seek employment. The cost of welfare and the seeming failure of its attempts to curb crime won over many social scientists, who called for a more punitive system of criminal justice. A name that appears repeatedly in literature about the New Right is that of James Q. Wilson. Wilson was a policy advisor to Reagan and Nixon during their terms as President (Young, 1998:281), and has written extensively on criminological theories. The stances of his writings are that: "...criminal law is defined by the State and its composition is no-problematic; and 'street crime' (including burglary) is by far the most important area to study" (Jones, 1998:231) There are two conflicting schools of thought on Wilson's work. Jones and Young both believe he is a true right wing theorist whereas David Green places Wilson as a 'neo-conservative' which is similar to the New Right, but different enough to be excluded from his book entitled 'The New Right'. ...read more.

Crime is committed by individuals, whether a group of individuals or one person by themselves, and so crime control has had to be geared towards that idea. Thatcherite Britain gave us the first push in the direction of preventing crime, and now New Labour are trying to take us on a step. New Right politics are still evident today even in New Labour. Tony Blair, PM, said: "Labour is the party of law and order today. Tough on crime and tough on the causes of crime." (Ratcliffe, 2001). So did the New Right era of the UK work? Did the crime control strategies actually reduce crime? Unfortunately not, no. In the early 1990s, it was clear that the prison population numbers were increasing, despite a drive toward cheaper, rehabilitative community sentences (Rawlings, 1999:154). The individual has been deemed responsible for his/herself and the criminal justice system treats them as such. However, for people to commit crime there must be an opportunity to do so, so by reducing opportunity, the New Right says, crime should reduce as well. In choosing to commit crime, the individual has overcome a rational choice and therefore accepts their punishment which is not outweighed by their gain - at least in their own opinion. ?? ?? ?? ?? Hemis Number: 103983 ...read more.