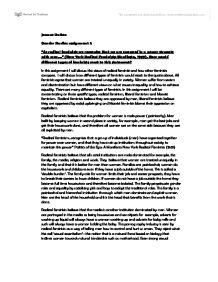 As radical feminists we recognise that we are engaged in a power struggle with men (New York Radical Feminists: Manifesto, 1969). How would different types of feminists react to this statement?

Joanne Dalton Gender Studies assignment 2 "As radical feminists we recognise that we are engaged in a power struggle with men..." (New York Radical Feminists: Manifesto, 1969). How would different types of feminists react to this statement? In this assignment I will discuss the views of radical feminist and how other feminists compare. I will discuss how different types of feminists would react to the quote above. All feminists agree that women are treated unequally in society. Women suffer from sexism and discrimination but have different views on what causes inequality and how to achieve equality. There are many different types of feminists. In this assignment I will be concentrating on three specific types, radical feminism, liberal feminism and Marxist feminism. Radical feminists believe they are oppressed by men, liberal feminists believe they are oppressed by social upbringing and Marxist feminists blame their oppression on capitalism. Radical feminists believe that the problem for women is male power (patriarchy). Men befit by keeping women in second place in society, for example, men get the best jobs and get their housework done, and therefore all women are on the same side because they are all exploited by men. "Radical feminism...recognises that a group of individuals (men) have organised together for power over women, and that they have set up institutions throughout society to maintain this power" Politics of the Ego: A Manifesto New York Radical Feminists (1969) ...read more.

The radical feminist movement has come a long way and is continuously growing. Liberal feminist believe in gradual change to improve things for women. They are known as the more moderate feminists, they do not have extreme views like radical feminists. They think that things have already improved but there is still progress to be made. Liberal feminists say that men can also suffer because of gender stereotyping, for example, men might lose out on spending time with their children due to being at work instead of at home, or men might find it difficult going into certain jobs such as childcare or hairdressing. The gender inequality theories of liberal feminists are not as developed as radical and Marxist feminism though they seem to have great support mostly due to their moderate view and the fact that they pose less of a challenge to existing values. They believe nobody benefits from existing gender equalities and the blame for those inequalities is placed upon social upbringing, culture and the attitudes of individuals. Socialisation into gender roles produces expectations of men and women. It is discrimination that prevents women from having equal opportunities in education and work, liberal feminism aims to challenge this. They aim to change legislation, educate people and change attitudes. They seek reforms rather than revolution, supporting the Equal Pay Act (1970) ...read more.

"In terms of Marxist theory, women appear insignificant: they sit on the side-lines of the grand struggle between capital and labour. Marxism may explain capitalism but does not explain patriarchy" (Haralambos and Holborn 2000) In conclusion to my assignment and regarding the title both liberal and Marxist feminists would react differently to the quote, both disagreeing but to different extents. Neither of the two feminists I have compared would agree that women's oppressions are caused by men alone. Liberal feminists believe to be engaged in a power struggle with the social upbringing of all individuals, whereas Marxist feminists believe to be in a power struggle with capitalism. Therefore men are included in these 'power struggles'. It seems to me that there is more evidence to support liberal feminism. Children are taught stereotypes from a young age with the toys they are given. The media is also constantly portraying stereotypes, for example, women's magazines have cooking recipes in them and there is a very large industry that produces p**********c magazines for men. Through this stereotyping there is always going to be sexism in society. Radical feminist believe only women are oppressed by men, but men are discriminated against if they want to go into certain jobs like hairdressing. As mentioned in the criticisms against Marxist feminists they concentrate too much on capitalism. If there was no class difference there would still be sexism against women due to stereotypes created by society. ...read more.