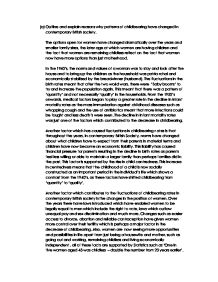 (a)Outline and explain reasons why patterns of childbearing have changed in contemporary British society.

(a) Outline and explain reasons why patterns of childbearing have changed in contemporary British society. The options open for women have changed dramatically over the years and smaller family sizes, the later age at which women are having children and the fact that women are remaining childless reflect on the fact that women now have more options than just motherhood. In the 1940's, the norms and values of a woman was to stay and look after the house and to bring up the children as the household was patriarchal and economically stabilised by the breadwinner (husband). The fluctuations in the birth rates meant that after the two world wars, there were 'Baby booms' to try and increase the population again. This meant that there was a pattern of 'quantity' and not necessarily 'quality' in the households. ...read more.

This increase in centredness means that the childhood of a child is now socially constructed as an important period in the individual's life which shows a contrast from the 1940's, as these factors have shifted childbearing from 'quantity' to 'quality'. Another factor which contributes to the fluctuations of childbearing rates in contemporary British society is the changes in the position of women. Over the years there have laws introduced which have enabled women to be legally equal to men which include the right to vote, laws which outlaw unequal pay and sex discrimination and much more. Changes such as easier access to divorce, abortion and reliable contraception have given women more control over their fertility which is perhaps a major factor in the decrease of childbearing. Also, women are now seeing more opportunities and possibilities in life apart from just being a housewife and mother, such as going out and ...read more.

Another factor in the patterns of childbearing in contemporary British society is the rise in immigration. Many immigrants, due to cultural beliefs, have larger families and encourage families to have a large number of children. This has made an increase on the fertility rates in the British society. Also, more women are choosing to cohabit with their partners, choosing to remarry men who already have children and more help has been introduced , making it easier for women, men and civil partnerships to adopt children which also contributes to the decrease and increase in childbearing. Conclude that attitudes towards family life have changed over the years and have made a profound cultural change, which is perhaps a result of economic fluctuations and changes. Women have undergone and discovered different lifestyle choices in addition to just getting married and having children and the patterns of childbearing have fluctuated throughout contemporary British societies. Jessica Hatton Evans, 12E. ...read more.