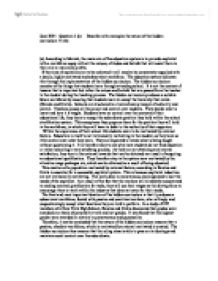 According to Marxist, the main aim of the education system is to provide capitalist with a workforce equip with all the values, attitudes and beliefs that will assist them in their aim to maximize profits.

June 2004 Question 1 (a) Describe with examples the nature of the hidden curriculum 9 mks (a) According to Marxist, the main aim of the education system is to provide capitalist with a workforce equip with all the values, attitudes and beliefs that will assist them in their aim to maximize profits. If the aims of capitalism are to be achieved it will need to be consistently supplied with a docile, highly motivated and subservient workforce. The education system achieves this through the implementation of the hidden curriculum. The hidden curriculum consists of the things that students learn through attending school. It is not the content of lessons that is important but rather the values and beliefs that are passed from the teacher to the student during the teaching process. The hidden curriculum produces a suitable future workforce by ensuring that students learn to accept the hierarchy that exists (Bowles and Gintis). Schools are structured in a hierarchical principle of authority and control. Teachers posses all the power and control over students. They decide what is learnt and how it is taught. Students have no control over the contents of their educational life, they learn to accept the subordinate position they hold within the school stratification system. ...read more.

A survey undertaken by Halsely (1980) proved the already noted fact that middle class boys had a greater chance of achieving academic success than their working class counterpart. A reason for this could be the explained in the fact that the economic stance of these children's parents means that they will be able to provide them with all the additional toys that would facilitate success. A middle class parent would have the finance required to send their children to the best schools, where they would be taught by the most experienced educationalist. In addition to which the parent would be able to hire the expertise of private tutors, in school is fully understood. This can therefore allow the middle class privileged student to achieve success. On the other hand a working class parent as a result of their disadvantaged position within the social strata would not be able to provide their children with additional resources that will help them prevail. The culture in which the middle class student has been raised can also be used as an indicator for their achievement. The middle class child would from birth be socialized into the use of the elaborated code. ...read more.

Boys on the other hand, rarely face sexism, and have stereotypes which motivate them to want to achieve academically. Males do not suffer problems of self assurance, and are aware of the wide assortment of careers that are available to them. Working class black boys are an exception to this rule. These boys are aware of the negative way in which they are viewed by the wider white society. They know that they are expected to fail and to never amount to anything. As a result of the self fulfilling prophecy, these children well eventually give up all hopes of succeeding and will live up to the negative image society has of them. Black working n boys know that they have a greater chance of failing within the education system, and as a result of this, they reject the values and ideas that are being passed on to them. This action assists in their failure, since it has been stated that success is directly related to ones ability to conform. Thus it can be seen that external factors are just as influential in determining the extent to which one is able to attain academic success. ...read more.