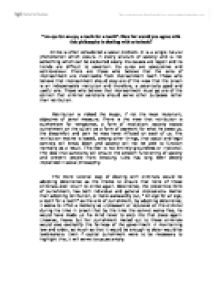 &quot;An eye for an eye, a tooth for a tooth&quot;. How far would you agree with this philosophy in dealing with criminals?

"An eye for an eye, a tooth for a tooth". How far would you agree with this philosophy in dealing with criminals? Crime is often considered a social problem. It is a single natural phenomenon which occurs in every stratum of society and is not something which can be explained easily. Its causes are legion and its trends are difficult to ascertain. Its cures are speculative and controversial. There are those who believe that the evils of imprisonment are inextricable from imprisonment itself. Those who believe that imprisonment should stay are of the view that the prison is an indispensable institution and therefore, a potentially good and useful one. Those who believe that imprisonment must go are of the opinion that criminal sanctions should serve other purposes rather than retribution. ...read more.

This fear is not entirely groundless or irrational. The idea that sanctions will ensure the smooth functioning of society and prevent people from breaking rules has long been deeply implanted in social philosophy. The more rational way of dealing with criminals would be adopting deterrence as the theme to ensure that none of these criminals ever return to crime again. Deterrence, the preventive form of punishment, has both individual and general implications. Rather than adopting retribution, or more awkwardly put, " An eye for an eye, a tooth for a tooth" as the aim of punishment, by adopting deterrence, it seeks to inflict a memory so unpleasant or repulsive on the criminal during his time in prison that by the time the convict walks free, he would have made up his mind never to step into that place again. ...read more.

The treating of criminals, one feels, should be to treat it like how a doctor would when he treats a patient stricken with illness, to find the cause and determine the best solution to heal it. The aim is to remove the factors that deviate a man from the right path and allow him to set out to be a law-abiding citizen. Some of these factors considered to be responsible for crimes are lack of affection at home, the environment, upbringing and frustration. In the prison, the emphasis is on reform. He is taught a skill so that his prison term could be profitably spent and he could secure a job on release. The remedial measures adopted are intended to make a criminal a normal person. After all, killing the offenders does not revive the life of the victim. ...read more.