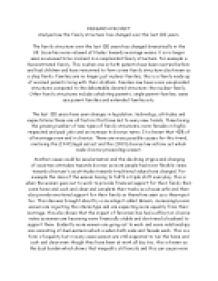 ﻿RESEARCH PROJECT Analyse how the family structure has changed over the last 100 years. The family structure over the last 100 years has changed dramatically in the UK. Societies more relaxed attitudes towards marriage means it is no longer seen as unusual to be involved in a complicated family structure. For example a Reconstituted family, This is when one or both parents have been married before and had children and have remarried to form a new family structure also known as a step family. Families are no longer just nuclear families, this is a family made up of married parents living with their children. Families now have more complicated structures compared to the debateable desired structure; the nuclear family. Other family structures include cohabiting parents, single parent families, same s*x parent families and extended families etc. The last 100 years have seen changes in legislation, technology, attitudes and expectations these are all factors that have led to many new trends, three being; the growing number of new types of family structures, more females in highly respected and paid jobs and an increase in divorce rates. It is known that 40% of all marriages now end in divorce. There are many possible causes for this trend, one being the (1949) legal aid act and the (1969) divorce law reform act which made divorce proceedings easier. Another cause could be secularisation and the declining stigma and changing of societies attitudes towards divorce as more people had more flexible views towards divorcee's as attitudes towards traditional values have changed. For example the idea of the woman having to fullfil a triple shift everyday, this is when the women goes out to work to provide financial support for their family then come ...read more.

There are now approximately 1.75 million lone parent families in Britain. Consequently more and more children are now growing up in single parent families despite stigma associated with this. Single parent families make up 24% of all family types. There could be many reasons for this growing trend. one being the increase in divorce and the impact of feminism as 90% of single parent families are headed by women, this could be because women are becoming more financially independant and stable and are finding that they dont need men in their lives for support. the trend could also be because women now have more oppurtunities to become highly respected and paid more in careers and therefore are choosing to dedicate their lives to a career instead of a marriage and then later on in life have a baby on their own. Another cause could be the decline in stigma attached to births outside of marriage because this will enable women to give birth to a baby creating a single parent family without being rejected by society. 4 in every 10 children are born outside of marriage. Some sociologists suggest that the welfare state encourages 'irresponsible behaviour' like this as the system funds single parents however 4 in every 10 children being born outside of marriage could just be because people are finding a marriage certificate less important and are just having children before they get married because these people will be a big part of these statistics. On the other hand just because some women are choosing to have children alone does not mean that this is all single parents intentions. ...read more.

Government policies usually favour the family structures they prefer and create a stigma to the structures that they dislike for example Thatcher created this idea that women working leads to 'latch key' children which is clearly ridiculous but peoples judgements were influenced by this. Murphy (2006) showed that households in 1971 consisted of 11,249 married couple and only 9,409 in 2006 and estimated that their would be 8,834 in 2026. compared to 341 lone parent house holds in 1971, 1642 in 2006 and predicted that their will be 1876 in 2016. this shows the intense difference over the period of 35 years and the prediction for the next 20 years and considering its 2012, Murphys statistics seem to be going in the right direction but until 2026 nobody will know how accurate his predictions were. There are many factors effecting the change of family structure over the last 100 years but none single handedly created all the new family structures that there are today. For example, same s*x families are negatively frowned apon by many corners of society. The New Right show great concerne about same s*x civil partnerships, adoption, IVF, Surrogacy. And some commentators go so far to say that it is unnatural and will have a negative effect on children. So why is there an increase? what are the causes of the increase? Dunne found that children brought up in same s*x families had less narrow views and found equality important in any relationship, and also found that these families produced more tolerant children. So why is it negatively labelled? This shows that every structure has negatives and positives and that no sociologist can single handedly prove which family structure is best in all specific cases, all specific countries and cultures. family is an individuals choice. ...read more.