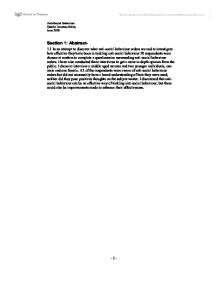 Research also found that offenders who are issued with ASBO's were not aware of the prohibitions. The fourth question asked respondents to indicate which orders they were aware of. The responses of the questionnaires indicated that the majority were aware of the stand alone ASBO and a Curfew and Dispersal Order. Research does suggest that that these two orders are commonly used by authorities such as the police and judiciary. The curfew and dispersal orders are commonly used in troubled areas and therefore the use is amplified through the media. The fifth question asked respondents to indicated which type of behaviours they classed as anti-social All respondents were able to identify the typical forms of anti-social behaviours such as graffiti, criminal damage and assault. This showed that the respondents know the definition of anti-social behaviour however, very few were aware of the wider spectrum of behaviours that ASBO's covered such as begging and prostitution. This may be because the use of ASBO's are not commonly issued for these forms of behaviour. The sixth question asked respondents to state why they thought individuals got involved in anti-social behaviour. The results of this question made it evident that all respondents believed that the causes of anti-social behaviour committed by individuals was presumably due to issues built up over a period of time such not receiving enough attention, this maybe from parents or guardians and a lack of discipline not being established. Through research a form of anti-social behaviour order was identified was identified called a parenting order which focuses on getting parents of those who have been issued with an ASBO on conviction to take responsibility for their children's offending behaviour. They help to engage parents to address their children's anti-social behaviour or offending behaviour and to establish discipline and a relationship with their child. This suggests that this is an effective way of engaging young people and helping them to stay away from committing crimes and anti-social behaviour. ...read more.

5.12 However, the presentation cold have gone into more detail and could have explored other issues surrounding anti-social behaviour orders such as their effectiveness to reduce anti-social behaviour. 5.13 The planning of the presentation helped to gather information specific to what I was seeking to achieve as well as helping to structure it well and keep a note of what had been completed and what still needed to be achieved in order for it to be presented to an audience. 5.14 Overall the research carried out provided more negative views on anti-social behaviour than positive which proved difficult when trying to provide a balanced opinion on anti-social behaviour orders. 5.15 Nevertheless, research provided a greater knowledge of what anti-social behaviour orders are their stated aims, criticisms and enabled discovery to take place. In terms of trying to discover how the public felt about them. 5.16 Further, it was discovered that ASBO's have the ability to be an effective tool in helping to reduce anti-social behaviour. However research argues that more productive measures need to be put in place and that measure already in use need to be re-approached in order for ASBO's to reach their full potential. 6. Recommendations- 6.1 The following recommendations are made for ASBO's: 1. Incentives to keep individuals from committing anti-social behaviour should be in place and as a result individuals will be encouraged into positive activities. 2. Measures to enhance the awareness and advantages of anti-social behaviour orders in the community, which will help to remove individual's barriers to ASBO's. If care is not taken regarding the above, it could be problematic as more and more young people continue to label them as a bad thing. 3. Measures to protect the families of those who have been issued with an ASBO to reduce the effect on the family as a whole. 4. Clear prohibitions for those who receive ASBO's. ?? ?? ?? ?? Anti-Social Behaviour Natalie Dunstan-Bailey June 2008 - 1 - ...read more.