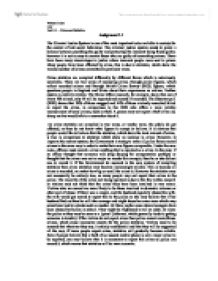 As crime statistics are compiled in two ways, or maybe more, the public do get affected, as they do not know what figures to accept or believe. It is obvious that people would like to believe that the statistics, which show the least amount of crime

Assignment 1.1 The Criminal Justice System is one of the most important tools available to society for the control of anti-social behaviour. The criminal justice system needs to prove a balance between punishing the guilty and protecting the innocent being found guilty; however it is not as easy to convict those who are guilty of committing crimes. There have been many miscarriages to justice where innocent people were sent to prison. Many people have been affected by crime, this is due to statistics, which show the various number of crimes committed in particular areas. Crime statistics are compiled differently by different forces which is notoriously unreliable. There are two ways of measuring crime, through police figures, which reflect recorded crimes and through British Crime Survey (BCS) figures, which questions people in England and Wales about their experiences as victims. ...read more.

Under the new rules, officers must record a crime anything that is reported as a crime. In the past, if an officer thought that someone was lying (hoping for compensation perhaps) or thought that the crime was not as major as murder for example, then he or she did not nee to record it. If the Government do succeed in the new system of compiling statistics then crime statistics may become increasingly reliable. This is because all crime is recorded, no matter how big or small the crime is. However the statistics may not necessarily be entirely true, as many people may not report their crime to the police. The majority of the crime not being reported is due to the fear within oneself, or victims may not think that the crime they have been involved in was minor. ...read more.

If more people report crime, statistics will gradually become reliable. Even if people believe that a theft of an insured mobile phone is not a major crime to be reported, one may believe that it is necessary to report this crime so police can record it, which means that statistics will be more accurate. Official crime statistics may not be entirely reliable however, it does keep the public aware of crime either increasing or decreasing in particular areas. Crime will probably never stop, so it will be very difficult to believe what statistics are true. If the Government change the existing ways of calculating figures, then hopefully statistics will become reliable, however, it also depends on the police, as they need to record all crime. Matters can be improved if more victims have the confidence to report crime and of all crime is recorded by the police; this should hopefully give accurate, reliable statistics. ?? ?? ?? ?? Vishala Tailor Law Unit 1.1 - Crime and Statistics ...read more.