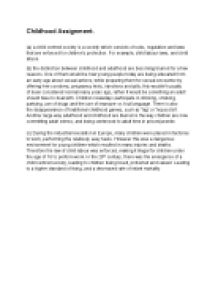 ﻿Childhood Assignment. (a) a child centred society is a society which consists of rules, regulation and laws that are enforced for children?s protection. For example; child labour laws, and child abuse. (b) the distinction between childhood and adulthood are becoming blurred for a few reasons. One of them would be how young people today are being educated from an early age about s****l actions, while preparing them for s****l encounter by offering free condoms, pregnancy tests, injections and pills, this wouldn?t usually of been considered normal many years ago, rather it would be something an adult should have to deal with. Children nowadays participate in drinking, smoking, partying, use of drugs and the use of improper or, foul language. There is also the disappearance of traditional childhood games, such as ?tag? or ?hopscotch?. Another large way adulthood and childhood are blurred is the way children are now committing adult crimes, and being sentenced to adult time in prison/juvenile. (c) During the industrial revolution in Europe, many children were placed in factories to work, performing the relatively easy tasks. However this was a dangerous environment for young children which resulted in many injuries and deaths. Therefore the law of child labour was enforced, making it illegal for children under the age of 16 to perform work. In the 20th century, there was the emergence of a child centred society, leading to children being loved, protected and valued. Leading to a higher standard of living, and a decreased rate of infant mortality (d) ...read more.

they believe you are never too young to undertake a task, if the child think he/she can handle it, the parents would not attempt to object to it. Sociologists have also discovered there are historical differences in childhood, so not only does the place change the status of childhood, but also the time period. In item A it tells us about Aries describing the medieval world in which, children were not the equals of adults, yet they mixed freely together in both work and leisure. In these times, children were seen as ?mini-adults? as they were granted the same rights, duties and skills as adults. For example the law would make hardly any distinction between the severe punishments that both children and adults would face. The view of childhood was not to be ?confused? with affection, while there should be an awareness of the differences of nature, in medieval times this awareness was lacking as they viewed it as a distinguishing line for age, which is why the child belonged to an adult society as soon as he isn?t in constant need for his mothers/nannies care. Sociologists such as Philippe Aries believe that childhood as a whole, in the western society has improved dramatically; this is known as the ?march of progress? view. They have noticed that in today?s? society, children are the focal point in the family, the parents spend most of their time, effort and money to give their children a better life than they did themselves, yet in the past children were supposedly ?seen and not heard?. ...read more.

cause, and not taking into his argument the fact that the standard of living is improving and there is now many changes in law to protect children. Sociologists such as Peter Opie have counteracted Postman?s point about the disappearance of childhood games, as there is evidence that there is a separate, continued children?s culture which is independent from the adult world, where they do in fact still play the same games, rhymes and songs. In conclusion, I agree mostly with the march of progress view, that childhood is steadily improving, and children are being safeguarded from the harms of the outside world. Children are no longer committed to working in factories or shops, but yet if they would like to earn their own money, they can now do favour for family and friends in exchange for money. Therefore allowing them to slowly develop a means of independence, without fully pushing themselves into a work force. Also I believe that society today is child-centred, as there is much more media output which focuses on children entertainment, and also many leisure activities are provided for young people. Although I do think that there is a lot more explosion of the adult world, I feel it has more affect on teenagers, as they take more notice in the older generations. This is not particularly a bad thing, as it allows them to prepare for the soon coming adult world in which they have to deal with, it does not necessarily scar them, or harm them in a way that younger generations would be. ...read more.