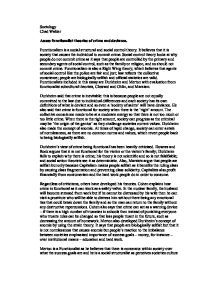 Sociology Chad Walker Assess functionalist theories of crime and deviance. Functionalism is a social structural and social control theory. It believes that it is society that causes the individual to commit crime. Social control theory looks at why people do not commit crime as it says that people are controlled by the primary and secondary agents of social control, such as the family or religion, and so should not commit crime. Functionalism is also a Right Wing theory, which believes that agents of social control like the police are fair and just; law reflects the collective conscience; people are biologically selfish and official statistics are valid. Functionalists included in this essay are Durkheim and Merton with evaluation from functionalist subcultural theorists, Cloward and Ohlin, and Marxism. Durkheim said that crime is inevitable: this is because people are not equally committed to the law due to individual differences and each society has its own definitions of what is deviant and so even a 'society of saints' will have deviance. He also said that crime is functional for society when there is the 'right' amount. The collective conscience needs to be at a moderate energy so that there is not too much or too little crime. ...read more.

Finally, if a person fails in both legitimate and illegitimate opportunity structures then they will join a retreatist subculture where they become alcoholics or drug abusers. To conclude, functionalist theories of crime and deviance can be criticised for ignoring white-collar crime, taking official statistics at face value and believing that the working class fail in education due to cultural deprivation when it may also be caused by material deprivation. Interactionist, Becker, found that teachers label pupils based on class so that teaching is then in favour of middle class pupils so they are more likely to succeed in legitimate opportunity structures. Bernstein also said that education teaches an ethnocentric curriculum that uses an elaborated code that middle class pupils have acquired at home while working class pupils are limited to a restricted code due to cultural and material deprivation so they are more likely to fail in legitimate opportunity structures. As Functionalism is also a Right-wing theory, it believes that the law reflects the collective conscience whereas Marxists disagree. Erickson's study of the wayward puritans found that ideology is imposed on people by people with power; thus, the law reflects the ideology of the ruling class. However, Durkheim believes that crime is inevitable but also functional and Merton states that crime is caused by societies culture that puts too much emphasis on success goals and not enough emphasis on institutional means of achieving them. ...read more.