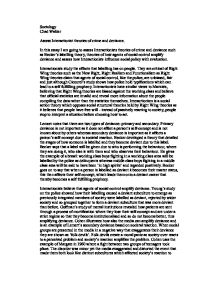 Folk devils create a moral panic as society over reacts to a perceived problem and society's reaction amplifies the problem. Cohen uses the example of Margate in 1960 where a fight between two groups of teenagers took place. The disorder was minor yet the media exaggerated and distorted the event that made them both look like distinct subcultures which affected society's reaction to teenagers. The people of Margate then labelled them and caused these two subcultures to emerge, creating a self fulfilling prophecy. However, McRobbie and Thornton have criticised Cohen by saying that due to the large amount of coverage of social events in the media, moral panics have become routine and so have less of an effect. Interactionists have been criticised for their theories of moral panic as they do not explain why the media amplifies some problems and not others. Interactionism (being a social action theory) criticises social structural theories for being deterministic as it says people are passive when the social action theory can be criticised for being deterministic too as labels do not inadvertently lead to a self fulfilling prophecy. The moral panic theory implies that people are passive although it says they are not. ...read more.

Left and Right Realist theories criticise Interactionism for romanticising crime by excusing working class crimes and ignoring the seriousness of working class crime. The Marxist, Goulder also criticises Interactionism for it ignores the concept of power and says that Capitalists have the power to impose labels. Goulder criticises Becker's research of moral entrepreneurs as he says that people are either successful or unsuccessful in changing the law based on the amount of power they have. For example, factories continue to pollute the environment as they have economic leverage over the government. To conclude, Interactionist theories of crime and deviance can be criticised as they do not explain why some problems presented in the media are amplified and why some are not. The labelling theory is deterministic as it assumes that labels will lead to self fulfilling prophecies when studies have shown that this is not always the case. It ignores white collar crime, romanticises working class crime by excusing it and ignores the concept of power and those who have the power to impose labels. However, developments have acknowledged that the behaviour may come before the label but since the 1990s Right Realist theories have surpassed Interactionism in their influence over government policy. ...read more.