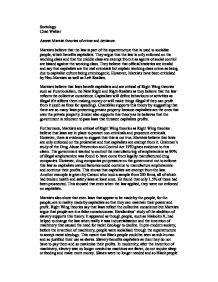 Sociology Chad Walker Assess Marxist theories of crime and deviance. Marxists believe that the law is part of the superstructure that is used to socialise people, which benefits capitalists. They argue that the law is only enforced on the working class and that the middle class are exempt from it as agents of social control are biased against the working class. They believe that official statistics are invalid and say that capitalists are the real criminals but explain working class crime as being due to capitalist culture being criminogenic. However, Marxists have been criticised by Neo-Marxists as well as Left Realists. Marxists believe that laws benefit capitalists and are critical of Right Wing theories such as Functionalism, the New Right and Right-Realists as they believe that the law reflects the collective conscience. Capitalists will define behaviours or activities as illegal if it affects them making money or will make things illegal if they can profit from it (such as fines for speeding). Chambliss supports this theory by suggesting that there are so many laws protecting private property because capitalists are the ones that own the private property. Snider also supports this theory as he believes that the government is reluctant to pass laws that threaten capitalists profits. ...read more.

Therefore, even laws that appear to benefit people actually benefits capitalists. Chambliss argues that in order to see that capitalists control the law we need to look at decision making and non decision making. This refers to what behaviour is defined or not defined as criminal. It is evident that certain behaviours are not criminalised as they maintain capitalists profit and power. Cigarettes are not criminalised as the government can tax them thus making money from them even though they kill thousands every year. Chambliss also gives the example of a movie magnate who spends thousands of dollars on his daughters 18th birthday while people down the street are dying from poverty. People accept this type of behaviour because they have been socialised to believe that they have earned it due to living in a meritocratic society. Right Wing theories see the police as being fair and just. Marxists on the other hand are critical of this as they believe that agents of social control are biased against the working class. Chambliss' studied crime in Seattle. Syndicates owned brothels and casinos, which the working class made complaints about to the police. ...read more.

Neo-Marxism combines traditional Marxism with Interactionism and developed a 'fully social theory of crime and deviance' to explain crime. To explain crime you must look at the wider and immediate origins of the deviant act, the act itself, immediate and wider origins of societal reaction and the effects of labelling. Hall's 'policing the crisis' can be applied to Taylor, Walton and Young's fully social theory. The act itself was mugging; to understand this the wider and immediate origins of the crime were examined (capitalism suffering from a recession, high unemployment and crisis of hegemony); the wider and immediate origins of societal reaction were a moral panic and r****t society. Hall argues that Black people were used as a scape-goat by capitalists so that they were blamed for social problems and cause class fragmentation. In terms of the effects of labelling, Hall's study showed how the label of being a criminal on Black people then led to a self fulfilling prophecy as a reaction to her behaviour of the police. In conclusion, Marxists believe that the law benefits the capitalists, is only enforced on the working class and the middle class are exempt from it, agents of social control are biased, official statistics are invalid, capitalists are the real criminals but has been criticised by Neo-Marxists for being deterministic, ignoring intra-class crime and the seriousness of working class crime. ...read more.