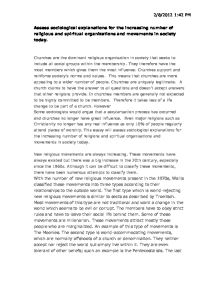 Assess sociological explanations for the increasing number of religious and spiritual organizations and movements in society today.

Assess sociological explanations for the increasing number of religious and spiritual organizations and movements in society today. Churches are the dominant religious organisation in society that seeks to include all social groups within the membership. They therefore have the most members which gives them the most influence. Churches support and reinforce society's norms and values. This means that churches are more appealing to a wider number of people. Churches are uniquely legitimate. A church claims to have the answer to all questions and doesn't accept answers that other religions provide. In churches members are generally not expected to be highly committed to be members. Therefore it takes less of a life change to be part of a church. However Some sociologists would argue that a secularisation process has occurred and churches no longer have great influence. Even major religions such as Christianity no longer has any real influence as only 10% of people regularly attend places of worship. This essay will assess sociological explanations for the increasing number of religions and spiritual organisations and movements in society today. New religious movements are always increasing. These movements have always existed but there was a big increase in the 20th century, especially since the 1960s. Although it can be difficult to classify these movements, there have been numerous attempts to classify them. ...read more.

Also as argued by Stark and Bainbridge those who are relatively deprived break away from churches to form sects. When looking at the growth of NRM's we can also look at social change to help explain it further. Wilson argues that periods of rapid change disrupt and undermine established norms and values, producing anomie or normlessness. A s there is so much uncertainty as we live in a fragmented society as described by postmodernists, those of us who are most affected by disruption may turn to sects as a solution. Bruce sees the growth of sects and cults today as a response to the social changes involved in modernisation and secularisation. In Bruce's view, society is now secularised and therefore people are less attracted to the traditional churches and strict sects, because these demand too much commitment. People now prefer cults because they are less demanding fewer sacrifices. There has been a significant growth with world rejecting NRM's and world affirming NRM's. For world rejecting NRM's, Adolescents and young adults are targeted. They Offer some certainty at an otherwise uncertain time, no dependants makes membership easier and radical beliefs appeal to the young with rapid turnover of members as a result of reliance on young. for world affirming NRM's Bruce argues that their growth is a response to modernity, especially to the rationalisation of work. These provide both a sense of identity and techniques that promise success in this world. ...read more.

Commitment often depends on the leadership groups have. For example the Branch Davidians had a highly charismatic leader in David Koresh. His presence meant that members were highly committed, rejected society and unlikely to leave.Some New Religious Movements are of their time, but quickly date and fade. For example the number of apocalyptic sects that sprung up around the millennium has diminished in popularity and influence. Some groups fail to recruit beyond their original members.Some New Religious Movements are marginalised to such an extent that it very difficult for them to survive. Established religious movements such as churches and denominations have more enduring power and attraction. To conclude, the main problem with categorising religious groups is their diverse characteristics. The criteria used to distinguish religious movements from one another is limited, leaving out a number of important Christian faiths and not applying to non-Christian faiths at all. Sociologists have very little idea about how a sect turns into a denomination. This gives the impression that any sociological theory that seeks to categorise NRMs is vague and lacks empirical support. Postmodernists would theoretically criticise the categorisation of NRM as religion is now personalised. It is impossible to distinguish between a cult, sect and denomination because individual members see them and use them in different ways. They would argue that the people join NRMs through choice rather than any societal reason. ?? ?? ?? ?? 08/02/2012 20:23 08/02/2012 20:23 08/02/2012 20:23 ...read more.