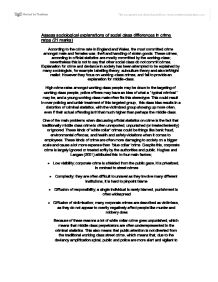 Assess sociological explanations of social class differences in crime rates (21 marks) According to the crime rate in England and Wales, the most committed crime amongst male and females was; theft and handling of stolen goods. These crimes, according to official statistics are mostly committed by the working-class; nevertheless this is not to say that other social class do not commit crimes. Explanation for crime and deviance in society has been attempted to be explained by many sociologists, for example labelling theory, subculture theory and also left/right realist. However they focus on working-class crimes, and fail to provide an explanation for middle-class. High crime rates amongst working class people may be down to the targeting of working class people, police officers may have an idea of what a ' typical criminal ' may be, and a young working class male often fits this stereotype. This could result in over policing and unfair treatment of this targeted group, this class bias results in a distortion of criminal statistics, with the victimized group showing up more often, even if their actual offending isn't that much higher than perhaps the middle class. ...read more.

reasons a lot of white collar crime goes unpunished, which means that middle class perpetrators are often underrepresented in the criminal statistics. This also means that public attention is not diverted from the traditional working class street crime, which means that, due to the deviancy amplification spiral, public and police are more alert and vigilant to working class crime, which could also cause selective policing to working class crime because of its attention, even if it is not warranted. From a Marxist perspective, the reason for the social differences in crime rates is because of the 'unequal structure of society '(Item A). The capitalist society based upon private enterprise and individual gain creates frustration and aggression amongst those who are not suited to and are oppressed by this system, namely the working class. Marxists argue that the working class are never in a position to succeed in capitalist society and that crime is one of their only outlets and opportunities for success, because of the alienation from capitalist society, working class people, especially young males, lash out the system that victimizes them, through crime, and this in turn leads to high amount of working class males being represented in the criminal statistics. ...read more.

They would also argue at how the corporate crimes are not fairly or equally recorded in the statistics. In conclusion, it is apparent and obvious that white collar and blue collar crimes are treated differently by the authorities. Blue collar crime is treated more harshly, with more money being spent to prevent it (with things like CCTV etc), a larger amount of arrests, convictions, and sentences for working class members, whereas white collar crime is often treated extremely leniently, because of its privatized and somewhat lesser known nature, it Is often only given warnings, short prison sentences, or fines. The reasons this are much argued and varied, but it is most likely a combination of cultural problems, deprivation of the working class forcing them to be aggressive to gain what comes easier to the middle class, unequal societal values, working class being alienated and starting from a lower position than the middle class, and the fact that the ruling class often do not seek to punish high status figures, and would rather stimulate moral panics about the seemingly less threatening ' middle class folk devils'. ...read more.