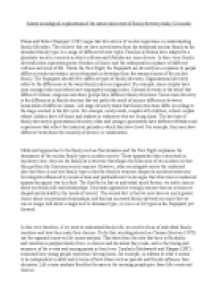 ﻿Assess sociological explanations of the nature and extent of family diversity today (24 marks) Rhona and Robert Rapoport (1982) argue that diversity is of central importance in understanding family life today. They believe that we have moved away from the traditional nuclear family as the dominant family type, to a range of different diverse types. Families in Britain have adapted to a pluralistic society; a society in which cultures and lifestyles are more diverse. In their view, family diversification represents greater freedom of choice and the widespread acceptance of different cultures and ways of life. Unlike the New Right, the Rapoports see diversity as a response to people different needs and wishes, not as abnormal or deviation from the assumed norm of the nuclear family. The Rapoports identify five different types of family diversity. Organisational diversity refers to the differences in the ways family roles are organised. For example, some couples have joint conjugal roles and others have segregated conjugal roles. Cultural diversity is the belief that different cultural, religious and ethnic groups have different family structures. Social class diversity is the differences in family structure that are partly the result of income differences between households of different classes. Life stage diversity states that family structures differ according to the stage reached in the life cycle- for example, newly-weds, couples with children, retired couples whose children have left home and widows or widowers who are living alone. ...read more.

Life course analysis therefore focuses on the meaning people give these life events and choices. Similarly to life course analysis, David Morgan (1996) uses the concept of family practices to describe the routine actions through which we create our sense of being a family member such as feeding the children or doing DIY. Our family practices are influenced by the beliefs we have about the rights and obligations within the family. For instance, some men may see feeding the children as the wife's job and not theirs. The concept of family practices thus allows is to see why conflict may exist within families- because different members may hold different beliefs or expectations about each others responsibilities. Morgan prefers the concept of family practices rather than family structures as a way of describing how we construct our life course and relationships. In his view, families are not concrete things or structures, they are simply what people actually do. Morgan argues that the concept of family practices get us closer to realities of everyday experience of family life that structural approaches such as functionalism; particularly in today's society, where individuals are much freer to choose how they organise their relationships. Postmodernists argue that we no longer live in the modern world with its predictable orderly structures such as the nuclear family. Instead society has entered a new chaotic postmodern stage. ...read more.

From the different contributions made by sociologists to our understanding of family diversity we can identify tow broad views- one against diversity and the other in favour of it. The first view opposes greater family diversity. It is held by Functionalists and the New Right. It is based on the belief that there is only one best or normal type of family. This is the traditional patriarchal nuclear family, consisting of a married couple and their dependent children, with a division of labour between an instrumental breadwinner and an expressive female home-maker and housewife. It supports the nuclear family as natural ? based on biological differences between men and women that suit them to their different roles. As such they see the nuclear family as best equipped to meet the needs of society and its members. By contrast other family types are seen as unnatural and dysfunctional. The second view is help by postmodernists and feminists. It rejects the New Right view that only the nuclear family is a proper family. Instead writers take the view that whatever from the family rakes, this is a proper family. Hence family is not natural but socially constructed by its members. Postmodernists and feminists are in favour of greater diversity. They see diversity as desirable because it brings people the freedom to choose the personal relationships and ways of living that meet their needs. In particular, it enables women to liberate themselves from the oppression of the traditional patriarchal family. ...read more.