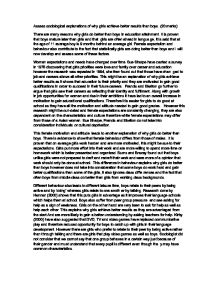 Assess sociological explanations of why girls achieve better results than boys. (20 marks) There are many reasons why girls do better than boys in education attainment. It is proven that boys mature later than girls and that girls are often ahead in language, it is said that at the age of 11 average boy is 9 months behind an average girl. Female expectation and behaviour also contribute to the fact that statistically girls are doing better than boys and I will now develop and assess some of these factors. Women expectations and needs have changed over time. Sue Sharpe have carried a survey in 1976 discovering that girls priorities were love and family over career and education however the research was repeated in 1994, she then found out that those have changed to job and careers above all other priorities. This might be an explanation of why girls achieve better results as it shows that education is their priority and they are motivated to gain good qualifications in order to succeed in their future careers. ...read more.

Different behaviour also leads to different leisure time, boys relate to their peers by being active and by 'doing' whereas girls relate to one another by talking. Research done by Hannan (2000) shows that this puts girls in advantage as it improves their language schools which helps them at school. Boys also suffer from peer group pressure and see asking for help as a sign of weakness. Girls on the other hand are very keen to ask for help as well as help each other. This explains why girls achieve better results as they are advantaged from the start And are more likely to gain a better understanding by asking teachers for help. Kirby (2000) have also suggested that DVD, TV and video games have replaced communicative play and therefore reduced opportunity for boys to catch up with girls in their language development. However there are girls who prefer to relate to their peer by being active rather than through talking and there are girls that play video games as well as boys. ...read more.

This shows that not only gender but also ethnic backgrounds effect educational attainment therefore we cannot say that girls better performance is only due to gender differences. However the ethnicity as a reason of underachievement is too generalized as ethnic minorities include many different groups and does not take into account class and gender differences within those groups therefore it is almost impossible to understand the complexities of cultural differences and their influence on educational achievement. Gender with no doubt has its influence in gaining qualifications however it is not always the case as educational achievement is effected by class and ethnic differences at the same time. In my opinion class differences is the major issues in educational attainment as money play a big role in everyone's lives in modern society. Pupils therefore are effected by their lack of money and the structure of education system which requires them to own for example a computer in order to do well. However it is wrong to assume that all boys or all working class students are underachieving as it is down to an individual's choice and attitude, if a person is motivated and determined to do well then there are no gender or class barriers. ...read more.