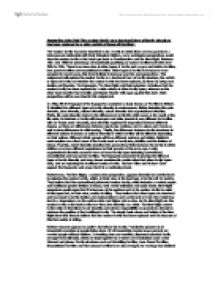 New Right supporters would argue that it is because of the replacement of the nuclear family by wider family types that, in their view, society is failing. They believe that other types are unnatural and have lead to family decline and social problems such as the lack of male role models has lead to a dependency on the welfare state and higher crime rates. As the New Right see the nuclear family as the best family form they view diversity as a crisis. The New Right answer to the crisis of diversity is to cut benefits and enforce responsibility on parents to attempt to reinforce the position of the traditional family. The simple basic views and beliefs of the New Right show that they do believe that the nuclear family has been replaced and it is because of this that society is failing. Further research appears to confirm diversity in the family. Twenty-five percent of all households comprise of people living alone. Of all households, twenty-seven percent are married people without children. In working class communities, dispersed extended family arrangements still exist, which are kept together by modern communications such as the Internet and phone. ...read more.

Robert Chester [1985] denies that the nuclear family has been replaced by other family types and places more emphasis on the idea of the 'neo-conventional family' which is a traditional family however the women of the family work as well as the men. He believed that the majority of people still lived in nuclear families however life cycles often result in people not living in traditonal family units. He argues it is misleading to simply use 'snapshot' statistical figures relating to the composition of family structures at any given moment, simply because people's lives are much more changeable in modern societies which, in effect, means they are likely to experience a diverse range of family experiences. Most of which will, in some form or another, involve living in a nuclear-type arrangement or, possibly more notably, wanting to live in that type of arrangement should the chance to do so be available. He therefore argues that the nuclear family has not been replaced by diversity in family types. Jennifer Sommerville would agree with Chester in arguing that the decline of the traditional nuclear family has been exaggerated and had not been replaced, as there is substantial evidence that the nuclear family still exists and that the majority of the population still live within it. ...read more.