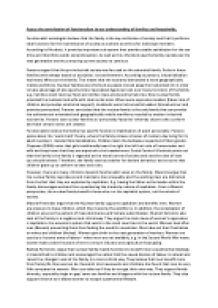 Assess the contribution of functionalism to our understanding of families and households.

﻿Assess the contribution of functionalism to our understanding of families and households. Functionalist sociologists believe that the family is the key institution of society and that it performs vital functions for the maintenance of society as a whole as well as for individual members. According to Murdock, it provides important sub-system that provides stable satisfaction for the sex drive and therefore avoids social disruption. As well as this, Murdock says the family reproduces the next generation and thus ensuring current society to continue. Parsons argued that the pre-industrial society was focused on the extended family. Roles in these families were always based on ascription, not achievement. According to parsons, industrialisation had many effects on the family. This meant that the economy demanded a more geographically mobile workforce. Nuclear families were formed as people moved away their extended kin in order to take advantage of job opportunities. Specialized Agencies took over many functions of the family e.g., families could now buy food and clothes mass-produced by factories. ...read more.

Therefore, the family sets boundaries for deviant behaviour and ensures that children grow up to conform to laws and rules. However, there are many criticisms towards functionalist views on the family. Marxists argue that the nuclear family reproduces and maintains class inequality and the working class are distracted from the fact that they are exploited by capitalism. E.g. having the father as the leader within the family discourages workers from questioning the hierarchy nature of capitalism. From a Marxist perspective, the nuclear family benefits those who run the capitalist system, not the whole of society. Marxist-Feminists argue that the Nuclear family supports capitalism and benefits men. Women are pressure to have children, which then become the workforce. In addition, the socialisation of children ensures the pattern of male dominance and female subordination. Marxist feminists also look at the family in a negative and critical way. They argue the main cause of women's oppression is capitalism- the economic system that exists in the most countries in the world. ...read more.

They support family diversity, especially single or gay/ same sex families and disagree with the nuclear family. They also support divorce as it allows women to escape a patriarchal lifestyle. The New Right holds traditional values and believes that the 'normal' nuclear family is the cornerstone of society. They believe in the nuclear family (similar to conservatives). They believe that families are not changing but 'deteriorating' because of the decline in the Nuclear Family. Murray believed that the Beveridge report encouraged the welfare state instead of helping people the way it was intended to because social attitudes lead people to believe they have a right to receive benefits. He is highly critical of the Welfare state and believes that this started a dependency culture, which has now led to an Underclass. In conclusion, functionalism does not contribute a lot to our understanding of families and households as there are many different views on the same concept by different sociological groups, therefore looking at just a functionalist argument would be bias and would only provide a narrow understanding of the whole concept of families and households. ...read more.

This is a fairly good essay that uses some very good counter-arguments in particular. The essay however does miss out some of the key aspects of the Functionalist view in terms of the main functions of the family. Also the introduction and particularly the conclusion need to be stronger. Mark: ***