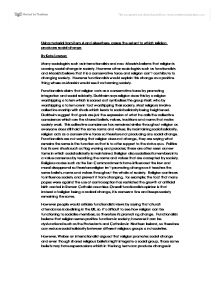 Assess the extent to which religion produces social change. Many sociologists such as functionalists and Marxists would argue that religion doesnt affect social change and is a conservative force.

Using material from item A and elsewhere, assess the extent to which religion produces social change By Kate Lawson Many sociologists such as internationalists and neo-Marxists believe that religion is causing social change in society. However other sociologists such as functionalists and Marxists believe that it is a conservative force and religion can't contribute to changing society. However functionalists would explain this change as a positive thing where as Marxists would see it as harming society. Functionalists claim that religion acts as a conservative force by promoting integration and social solidarity. Durkheim says religion does this by a religion worshipping a totem which is sacred as it symbolises the group itself, who by worshipping a totem are in fact worshipping their society. Most religions involve collective worship with rituals which leads to social solidarity being heightened. Durkheim suggest that gods are just the expression of what he calls the collective conscience which are the shared beliefs, values, traditions and norms that make society work. This collective conscience has remained similar throughout religion as everyone does still hold the same norms and values. By maintaining social solidarity, religion acts as a conservative force so therefore not producing any social change. Functionalists are not saying that religion does not change, they are saying what remains the same is the function as that is to offer support to the status quo. ...read more.

So therefore religion helped to encourage the spirit of capitalism which is a set of ideas, ethics and values. Therefore Weber claims that religion does contribute to causing social change amongst society as it contributed a great deal in the industrial revolution. This is reflected in Item A as it shows the Protestants main work ethic to "produce riches" and "grow rich" which also is very similar to the capitalism ethic. Weber also says that social change can be caused by charismatic religious leaders as they have been responsible for a number of many alternative social arrangements, often causing conflict with mainstream society. However people argue against Webers theory as some countries with a large Calvinist population didn't industrialise such as Norway and Sweden. Some sociologists would say that slavery, colonialism and piracy were more important in developing industrialisation and producing the capitalist work ethic. Marxists such as Kautsky argued that capitalism predates Calvinism; he argued that the early capitalists were attracted to capitalism because it made their interests appear legitimate. Aldridge argues that charismatic leaders can be unstable and the movements that these leaders create are often changed when the leader dies. Like Durkheim, Marx also argues that religion is a conservative force, however he sees this force as negative. Marx argues that the primary function of religion is to reproduce, maintain and justify class inequalities, and that is used as ideological apparatus which serves to reflect the working class ideas and interests. ...read more.

Ghandia used the Hindu concept of sarvodaya to attack the British colonial rule. Another factor they is social location, they believe that where a religious organisation plays a major role in political or economic life, there is more chance of it causing social change. Their third factor is beliefs, religions are that emphasise strong moral codes are more likely to produce members who will be critical and challenge social inequality and injustice, for e.g. Christianity was a huge opponent of apartheid in south Africa. Their last factor is internal and external organisation and they believe that religions with a strong centralized source of authority have more chance of affecting events. In conclusion, many sociologists such as functionalists and Marxists would argue that religion doesn't affect social change and is a conservative force. Functionalists would say religious does this by keeping social solidarity in tact which prevents people needing a change; they also describe people of having a value consensus which is the shared beliefs in society which prevent social change. Marxists would argue that religion is ideological apparatus which distracts the working class from oppression and distracts people from seeing a need for social change. However internationalists would disagree as they see religion as causing radical changes such as the Calvinists being a major factor of the industrial revolution due to their similar ethics. Other sociologists would also argue that religion causes social change such as Neo-Marxist Gramsci, who claims religion is a relative autonomy and allows change to take place. ...read more.