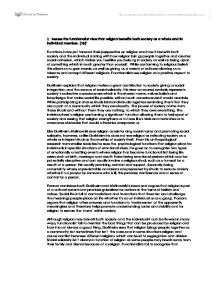 Assess the functionalist view that religion benefits both society as a whole and its individual members.

5. 'Assess the functionalist view that religion benefits both society as a whole and its individual member. (18)' Functions have put forward their perspective on religion and how it benefits both society and the individual starting with how religion brings people together and creates social cohesion, which makes you feel like you belong in society as well as being apart of something which is much greater than yourself. While conforming to religious beliefs this allows us to gain morals, as well as giving us a variety of cultures allowing us to tolerate and accept different religions. Functionalists see religion as a positive aspect to society. Durkheim explains that religion makes a great contribution to society giving us social integration, and the source of social solidarity. His view on sacred symbols represents society's collective consciousness which is the shared norms, values beliefs and knowledge that make social life possible without such consciousness it would crumble. ...read more.

and can usually involve a religious ritual, such as a funeral for a death of a person this usually providing comfort and support. Secondly being uncertainty where unpredictable occasions are preceded by rituals to reduce anxiety whether it's a prayer for someone who is ill, this provides confidence and a sense of control for a person. Parsons combines both Durkheim and Malinowski's ideas and argues that religion is part of a cultural system and provides guidelines for actions in the forms of beliefs and values. Social life is full of contradictions and frustrations that threaten and challenge the meanings people place on life whether it's as an individual or as a group. Parsons argues that religion offers answers and functions to 'make sense' of the apparently meaningless and therefore helps promote understanding order and stability and for religion to restore the 'norm' within society. ...read more.

Functionalists ignore atheists and fail to see that they can live a fulfilled life with out any intervention of religion or God, and can still lead a comfortable life. Although religion is flawed it does promote many positive functions, allowing us to explore different cultures and religions and belief systems. They don't see one type of religion as dominant or there is just one type of religion and religious beliefs. It shows that religion can reassure people through hard times and give answers to unexpected events which may seem unexplainable which people can be comforted in time of need. Although some people may argue that the individual is sacred and not society such as Margret Thatcher who said that 'there is no such thing as society: there are individual men and women, and there are families'. Religion can be both a positive function for society as a whole and individuals but also negative, it depends on how it is viewed and in what situations. ...read more.

The writer demonstrates that they have a lot of sociological knowledge in the introduction – this is because they concisely state how religion is seen by Functionalists as both beneficial for society as well as the individual. Therefore it is ...

The writer demonstrates that they have a lot of sociological knowledge in the introduction – this is because they concisely state how religion is seen by Functionalists as both beneficial for society as well as the individual. Therefore it is clearly answering the question set. The last two paragraphs provide the evaluation which is answering the “assess” part of the question. However I would add a short conclusion to summarise, stating why Functionalists see religion as beneficial to society as well as the individual. This writer focuses on only the individual in their last paragraph, not society, so I feel it is not a conclusion – just another section of the main essay.

Immediately there is a mistake in the first line, “Functions have put forward their perspective...” (“Functions” instead of “Functionalists”) which gives the impression that the essay will continue to be full of mistakes. This is a crucial term in Sociology and for this specific question – so it must be put right!
The writer discusses views of Durkheim, Malinowski and Parsons who are the theorists that will certainly spring to mind to every Sociology examiner. They also mention key terms with regard to these Functionalists such as “social solidarity”, “social integration” and “norms and values” which is credible. What is particularly good about this essay though is that it cites contemporary examples and applies them to modern society, such as “’Margret Thatcher who said that 'there is no such thing as society: there are individual men and women, and there are families'” and it also mentions “suicide bombers” which shows the examiner the depth of their sociological understanding.
But at A Level I would expect to see other theories within Sociology discussed apart from Functionalists, for example radical feminists believe that religion is not beneficial for all of society, only men, as it legitimises women as second class citizens (for instance because the Bible portrays women as agents of evil and temptation – Eve tempted Adam to bite the apple). This would provide more evaluative marks.

There are some grammatical issues in this essay, most of which probably would have been corrected if the candidate had checked their work. For example “whilst participating in shares rituals” instead of “shared rituals”. It just makes you look like an all-round candidate if you have a high quality of writing. Also the writer says “The individual see's religion” – the apostrophe here is not needed. This essay would hugely benefit from the use of quotation marks to show the examiner that the sociological terms they are using are someone else’s and not their own, for instance Malinowski coined the term “life crises”.