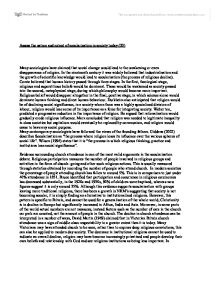 Assess the nature and extent of secularization in society today. Evidence surrounding church attendance is one of the most valid arguments in the secularisation debate.

Assess the nature and extent of secularization in society today (33) Many sociologists have claimed that social change would lead to the weakening or even disappearance of religion. In the nineteenth century it was widely believed that industrialisation and the growth of scientific knowledge would lead to secularisation (the process of religious decline). Comte believed that human history passed through three stages. In the first, theological stage, religious and superstitious beliefs would be dominant. These would be weakened as society passed into the second, metaphysical stage, during which philosophy would become more important. Religious belief would disappear altogether in the final, positive stage, in which science alone would dominate human thinking and direct human behaviour. Durkheim also anticipated that religion would be of declining social significance, in a society where there was a highly specialized division of labour; religion would lose some of its importance as a force for integrating society. Weber too, predicted a progressive reduction in the importance of religion. He argued that rationalization would gradually erode religious influence. Marx concluded that religion was needed to legitimate inequality in class societies but capitalism would eventually be replaced by communism, and religion would cease to have any social purpose. Many contemporary sociologists have followed the views of the founding fathers. Giddens (2002) describes Secularisation as "the process where religion loses its influence over the various spheres of social life". Wilson (1996) states that it is "the process in which religious thinking, practice and institutions lose social significance". Evidence surrounding church attendance is one of the most valid arguments in the secularisation debate. Religious participation measures the number of people involved in religious groups and activities in the form of church- going and other such religious actions. This is usually measured through statistics obtained by recording the number of people who attend church. In modern societies the percentage of people attending church has fallen to around 5%. ...read more.

It used to be that many farmers bought produce and celebrated, whereas in 1998 "a very small number of people in my village (only one of them a farmer) celebrated the harvest." Bruce provides the argument of a supermarket culture of spiritual shopping to explain this change. Further, few people turn up to weddings or funerals as very few know the betrothed or deceased. However, Bruce may exaggerate the extent of both the social change and the consequence upon religion as an institution. Some argue that Bruce has not reviewed the evidence enough. Additionally, some argue that we simply cannot be sure we are moving from a religious age. Religious Pluralism is about diversity in types of religious organizations and beliefs in society. As a result the established, national church loses its influence in integrating people into shared values. Bruce (1992) argues that religious pluralism results from a variety of sources, all of which have "undermined the communal base to religious orthodoxy". For example, England expanded to incorporate Scotland and Ireland which had different religious traditions. Industrialization reduced the contact between social classes and helped create new, predominantly working-class versions of Christianity, such as Methodism. Recent immigration also contributes to pluralism. Wilson and Bruce use pluralism as supporting evidence for secularization, because it gives people choice and may cause individuals to question truth claims. Bruce believes religion remains strong because of its social importance rather than because the members of the group have deep religious convictions as individuals. Bruce claims that religion tends to serve one of two main purposes for ethnic groups: cultural defence or cultural transition. Religion takes on the role of cultural defence when two communities are in conflict and they are of different religions, the religious identity of each can call forth a new loyalty as religious identity becomes a way of asserting ethnic pride. Cultural transition occurs when religion is use das a resource for dealing with situations where people have to change their identity to some extent. ...read more.

The fact that religion has become more have become more diverse and based on choice seems to suggest that religion is still important in society. Furthermore, The Kendel Project supports the post modernity thesis. In this study, which took place between 2000 and 2001, a "body count" of attendees at religious ceremonies were carried out, along with a number of interviews, a street survey and ethnography. Heelas et al. found that while attendance at churches were declining, more people were becoming involved in spiritually inclined groups and alternative therapies connected to the New Age. Out of the 2, 207 people in the town only 7.9% of the population now attends church, down from 11% 20 years ago. Although holistic practices are still comparatively small (less than 2% of the population nationally participate) it is the phenomenal rate of growth not just among the young but also the middle- aged that is threatening to overshadow the church. According to the Kendel Project then, secularization is only taking place in the narrow sense of a decline in traditional religion. From a broader perspective, beliefs are shifting away from traditional religion towards more individualist, spiritually inclined beliefs. Grace Davie states " It is clear that a manifest reduction in the "hard" indicators, of religious life has not, in the short term at least had similar effect on rather less rigorous dimensions of religiousness... believing without belonging is a pervasive dimension of modern European societies." In conclusion, it could be argued that we have shifted to a period of "New Voluntarism." Due to the significance of religion in the US a new paradigm (general way of seeing the world) in the sociology of religion has started to emerge. The secularisation thesis is "ethnocentric, empirically unsafe, and intellectually bankrupt". There is a lot more focus on the individual, this is where the idea of "Shiela-ism" takes centre stage. "People have choices: they can reject their old allegiances outright, convert to a new identity or return assertively to the faith of their parents. Religious affiliation is typically chosen rather than ascribed for all time at birth." ...read more.