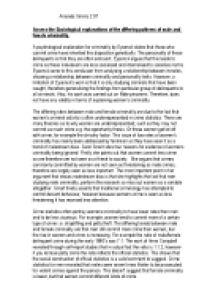 Assess the Sociological explanations of the differing patterns of male and female criminality.

﻿Amanda Simms 2.07 Assess the Sociological explanations of the differing patterns of male and female criminality. A psychological explanation for criminality by Eysenck states that those who commit crime have inherited this disposition genetically. The personality of these delinquents is that they are often extrovert. Eysenck argues that this leads to crime as these individual?s are less socialised and internalised to societies norms. Eysenck came to this conclusion from analysing a relationship between inmates, showing a relationship between criminality and personality traits. However, a limitation of Eysenck?s work is that it is only studying criminals that have been caught, therefore generalising the findings from particular group of delinquents to all criminals. Also, his work was carried out on Male prisoners. Therefore, does not have any validity in terms of explaining women?s criminality. The differing rates between male and female criminality are due to the fact that women?s criminal activity is often underrepresented in crime statistics. There are many theories as to why women are underrepresented; such as they may not commit as much crime e.g. the opportunity thesis. Or those women get let off with crime, for example the chivalry factor. This issue of low rates of women?s criminality has mainly been addressed by feminism as they have seen it as a trend of malestream bias. ...read more.

Women are seen to be the role of the mother so is therefore more caring and nurturing on the whole. This idea can be applied to everyday practice such as speeding. Women can escape speeding tickets by arguing that they were late picking the kids up from school etc. The officer is more likely to be chivalrous towards the lady. Also, when women are seen to commit more vicarious crimes they are often looked upon more harshly. An example of this is Maxine Carr or Myra Hindley. However, contrary to this NSPCC in 1980 found that men still committed the majority of violence within the home. This suggests that the chivalry factor must not exist, unless it applies to both genders, as men are still sneaky in that they still get away with abusing women and children. Also, Heidensohn argues that women-hiding childbirth and menstruation is culturally specific, as it does not happen universally. Therefore, the idea of the ?masked offender? is incoherent. She also argues that the main factor in relation to gender and crime is the society expectations towards the role of the offender. For example, women who are sexually promiscuous are seen to be deviant and are more likely to custodial sentences. ...read more.

Due to consumerist society persuading the individual that the ?good life? is in the form of luxury goods, then many of Carlen?s participants could not find legitimate ways to live, and therefore turned to crime. She also argues that for many women like those in her research the gender deal has been broken. Patriarchal society sets up a deal those women should aspire to gaining the love of a man and tacking on the role of ?domestic morality?. However, for those in her research their fathers had sexually abused many. And had no notion of gaining the affection of a man purely for domestic gain. However, Carlen found valid data from her research into female criminality. She used a small sample and many participants coming from the same social class. Therefore her findings cannot be generalised to the wider population. Her research has given insight into the effects of marginalization on female criminality. However it has not explained the difference in male and female patterns of crime. The most plausible explanation to the differing patterns in male and female crime is that female crime is under reported and under represented. Heidensohn gives the most reasonable explanation to the under representation of female crime statistics. Both Carlen and Heidensohn use the notion of control over women and show how criminality is a result of a deal been broken. ...read more.